Why Peet’s Purchase of Stumptown is Great for Coffee 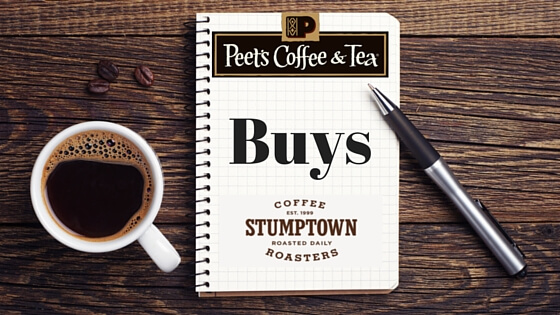 Peet’s Coffee purchased Stumptown Coffee Roasters this week, much to the chagrin of coffee snobs everywhere (including me, initially).

But after the shock settled and I actually had time to process the news, I realized that this may actually be one of the best things to happen to the coffee industry in recent memory.

Peet’s is responsible for my love of coffee

Sometimes I’m quick to forget how much Peet’s has done for me over the years in terms of developing my love for coffee.

Peet’s started in the city I grew up in (Berkeley, CA), my dad drank (and continues to drink) it religiously, and I bought my first “serious” coffee equipment (tamper, espresso machine, burr grinder) at Peet’s.

Even 5 years ago I was going to Peet’s almost every morning before dropping my girlfriend off to work. It was a pleasant ritual.

The first time I was exposed to Stumptown was at my friend’s cabin in Tahoe.

His dad, an espresso fiend, mentioned that he mostly bought his beans from Stumptown. Coincidentally, a trendy cafe 3 storefronts down from the Peet’s my girlfriend and I went to, brewed with Stumptown coffee exclusively.

Long story short…the coffee was really good, and this was the beginning of my transition into consuming third wave coffee (Stumptown) over the second wave (Peet’s) almost exclusively.

Why Peet’s purchase of Stumptown is a good thing

When Starbucks recently purchased La Boulange (a quaint patisserie chain in San Francisco), all of the La Boulange locations were almost immediately shut down.

It was as if Starbucks completely swallowed the La Boulange brand, no crumbs left behind.

Peet’s and Stumptown however, have been insistent that this acquisition is different in the sense that Stumptown will still operate independently, doing what they’ve been doing with the assistance of Peet’s resources and massive scale.

Whether this is the case remains to be seen…but the intentions are at least good.

From Stumptown’s perspective, they get to grow bigger and spread the third wave coffee movement even farther.

What do you think?

Since everybody is weighing in on this news I figured I’d do the same. But I’m most interested in what you think, so please leave a comment below about your thoughts on this recent acquisition.

PrevPreviousTwo Dads and Their Love of Coffee
NextCoffee Gift Guide 2015: Gifts for the Coffee BeginnerNext
On Key