Two Dads and Their Love of Coffee 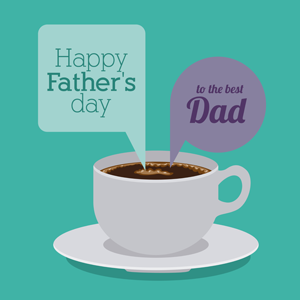 A couple years ago I wrote a post for Father’s Day where I pretty much ripped my dad’s coffee making skills apart.

Looking back, I’m pretty disappointed in the title that I gave the piece (My Dad’s Awful Coffee), because it really wasn’t true. Plus, on a relative scale the coffee my dad made was better than the coffee you’d drink in a typical American kitchen.

Fast forward a few years and not much has changed with the coffee he drinks.

Still Peet’s. Still a Krups blade grinder. Still an open bowl full of ground coffee next to the coffeemaker.

And you know what? It doesn’t really matter that much.

As I mentioned in my last post, coffee is about way more than the way it tastes. The social and sentimental value of it can’t be overlooked.

This year’s Father’s Day is a little bit different than last years, as my dad isn’t quite able to make coffee (for now). He had a major hemorrhagic stroke in September 2014, which has left the left side of his body dormant.

He’s quickly regaining his strength though, and we are all very fortunate he can still speak, his memory and personality are completely intact, and he still looks forward to his cup of coffee every morning.

I’m grateful for this, and also very fortunate that I get to be with him on the other side of the country for this special day.

I’d be remiss if I didn’t mention my second father, Tom, who has been married to my Mom for almost 20 years now.

Tom, like my dad, loves his Peet’s coffee. However, he makes it one cup at a time with a pour-over dripper instead of an auto drip coffee maker.

In fact, years ago I bought him a simple Mr. Coffee auto drip coffeemaker (before I became a snob) because I thought it would make his life easier.

He was happy with his pour-over routine because it got him exactly what he needed, one great-tasting cup of coffee.

So a few years later I bought him a Hario V60 to replace the all-plastic Melitta dripper he was using.

Nothing in his routine has changed. He is just using a new dripper, that in my opinion is safer because it’s only glass that is coming into contact with the hot water, not plastic.

Tom now drinks decaf coffee after being diagnosed with Parkinson’s Disease a few years ago. He found that the caffeine exacerbates the tremors, which is the main reason he made the switch.

In the past, whenever I wanted coffee during a visit I would cast it aside because I automatically assumed decaf coffee was inferior coffee.

This was just the snob in me though, because when I finally made a cup of the decaf I found it to be delicious. Decaffeinated or not, it was still coffee. It still gave me that warm, fuzzy, inspirational feeling…and that was all I needed.

So where am I going with this?

I guess I just wanted to write this post to acknowledge my two fathers and their respective loves for coffee.

I also wanted to reflect on how awesome it is that they are both still enjoying coffee every day, despite battling two different neurological diseases.

To donate to the American Stroke Association, click here.

To donate to the Michael J. Fox Foundation for Parkinson’s Disease, click here.

Cheers to you and your families on this Father’s Day, and I hope you are enjoying a cup of coffee with someone special today.

I’d love to hear about how you guys are spending your Father’s Day, with coffee or otherwise. Similarly, if you have a story about your own father(s) and coffee, I’d love to hear it.