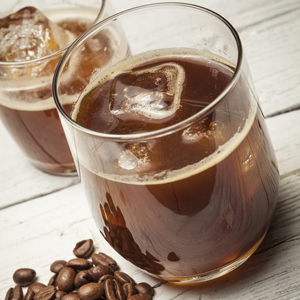 I’m obsessed with cold brew coffee, I know. As I’ve mentioned several times already, it’s one of my favorite brew methods these days.

But I’ve been wondering something for awhile now: what is the best way to make it?

There seems to be about 4 ways most people make cold brew iced coffee:

You could also buy cold brew concentrate or iced coffee at your local grocery store, there are plenty of options.

But what is the best way to make cold brew iced coffee?

That’s what I was determined to find out. So I setup a pretty informal blind taste test for myself where I’d be tasting 2 of the 4 options above, with one store-bought version thrown into the mix as well (Chameleon Cold Brew).

And the other two cold brews?

Slow drip cold brew coffee is the latest craze in iced coffee. Popularized by the Japanese, the process involves about 1 drop of cold water per second over the ground coffee. The traditional contraptions are very big and look like large hourglasses. 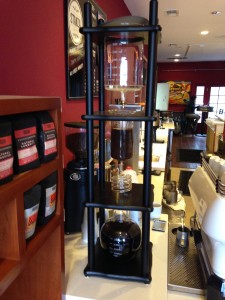 The one I’d be using however, is the much smaller, Kickstarter-funded, Cold Bruer. 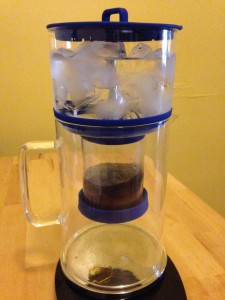 This method requires virtually no special tools or coffee makers, and is one of the most popular ways of making cold brew iced coffee today.

Here’s what I did: I ground my coffee, added it to a small pot, added water, and let it sit for 24 hours in the fridge. I also stirred it with a large wooden spoon approximately every 6 hours.

After this, I poured the contents through a paper filter in my Bonmac.

Granted, most of the ground coffee was left behind, but the resulting liquid had still been in contact with ground coffee for 24 hours, so I don’t think it really mattered too much. 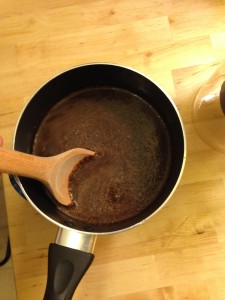 Chameleon offers a bottled option of cold brew that you can likely find at your local grocery store. I recently wrote a review on it here.

Somewhat interestingly, this cold brew was said to have been steeped over a 16 hour period. 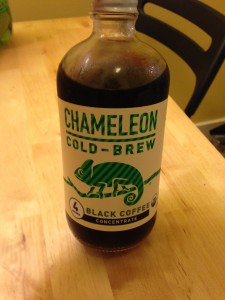 For the experiment, I used 3 double-walled espresso glasses, each with labels stuck underneath them. For the Bruer I marked the label as “B,” for the Immersed cold brew I labeled an “I,” and for the Chameleon I labeled a “C.”

I then poured the respective cold brews in their labeled glasses, and closed my eyes.

I shuffled the cups around until I didn’t know which was which. Let the tasting begin… 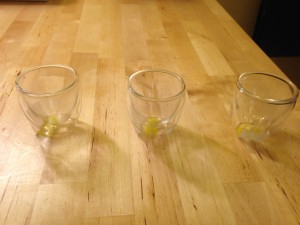 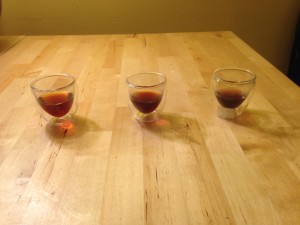 I did 3 rounds on myself…here’s what I found:

So for me personally, the Bruer was the winner via the slow drip method.

How about others? Well, so far I have only tested this on one other person: my tough critic, girlfriend.

Here’s what she thought:

So yeah, she didn’t really like any of them too much…but in relative terms she liked the slow drip.

Aside from my girlfriend, I tested the cold brews on one other friend. Her preference?

I will update this post later when I have more data from different blind tasters. Good news is that I still have plenty of all 3 cold brews sitting in my fridge.

So how should you make your cold brew iced coffee?

If you have no time to make it yourself, I recommend trying a few from the grocery store and seeing what you think. If you like one and think the price is justified, go for it!

If you would like to make your own, but don’t want to spend a lot of money, definitely give the immersion method a try. It doesn’t even have to be a 24 hour steep, feel free to experiment!

If you have some discretionary cash lying around and want to make your own slow drip cold brew, for now, the Bruer is definitely the way to go. You can check out my review here.

Tools and materials used in this experiment