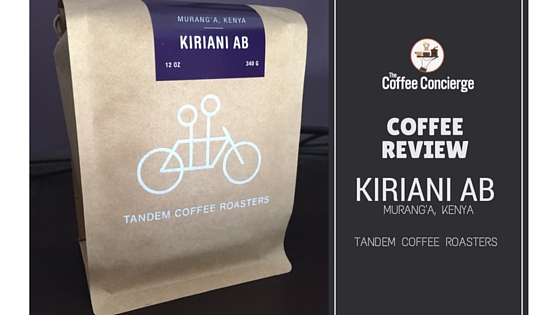 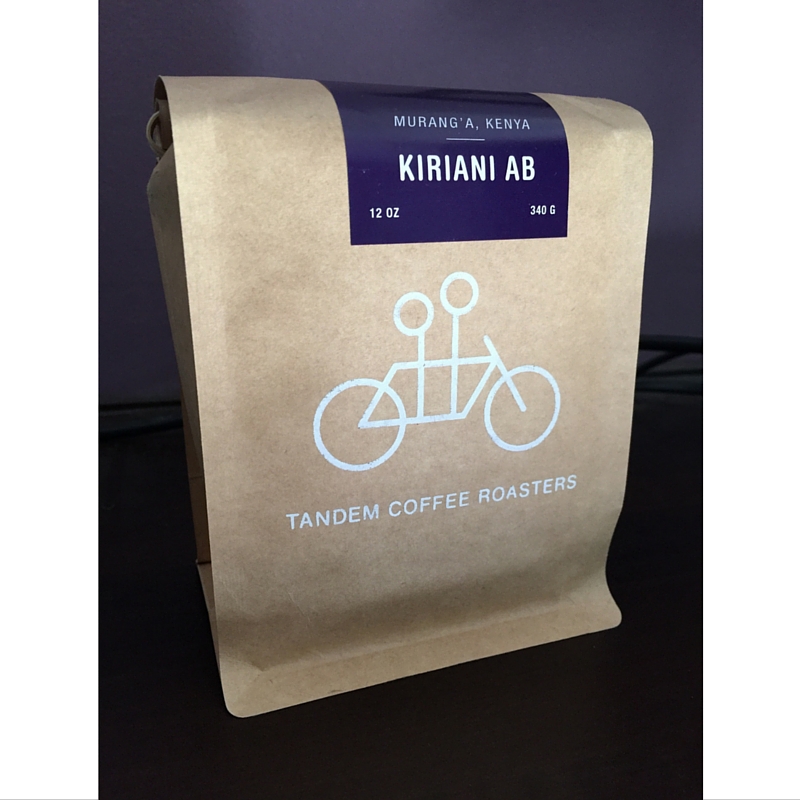 I had been deprived of specialty coffee for weeks before receiving this bag from Tandem Coffee Roasters through my Mistobox subscription. The Kiriani AB from Murang’a Kenya has a beautiful floral aroma with citrus, berry, and vanilla flavor notes.

Tandem Coffee Roasters is a wholesale coffee roaster with two retail locations in Portland, Maine. Owners Will and Kathleen Pratt got their start in the coffee industry working in cafés in California, Massachusetts, and New York before opening their own shop, Tandem Coffee Roasters, in 2012.

Tandem sells their coffee directly through their website, third party subscription services like Mistobox, and in over 40 cafés across the country.

About The Producers (Kiriani Estate)

According to Junior’s Roasted Coffee, the Kiriani Estate was founded by Beth Njoroge and five other family members in 1978. SL-28 and SL-34 coffee varieties are grown in this estate alongside tea and bananas. Growing multiple crops is not uncommon on Kenyan coffee farms.

“This fully washed coffee was sourced from the growing region of Murang’a in Kenya and was produced by various small holder producers at 1,680 meters.”

I brewed with the following coffee makers when working with the Kiriani AB: AeroPress, Chemex, Hario V60, and espresso via MyPressi Twist.

One of my first cups of the Kiriani AB was brewed with an AeroPress and it damn near knocked me on my ass it was so good.

It was sweet, full-bodied, complex, and balanced. Everything I could possibly want in a cup of coffee.

This isn’t to say I got the same great results every time though. In fact, on multiple occasions I under-extracted this coffee when brewing with the AeroPress and it was a pretty sour mess.

But this is a coffee with very high acidity. So if you’re going to venture past the sour stage you really can’t be afraid to go with a finer grind than you may normally use.

My experience was very heavy on the grapefruit notes, and just like a grapefruit, it’s hard to find the ones that have that true sweetness.

Something very interesting happened when I brewed the Kenya Kiriani AB for the first time with the Hario V60.

You see, my fiancée asked me to make her a cup of coffee, and since I also wanted a cup and didn’t want to have to resort to auto drip, I put two Hario V60s side-by-side and got to brewing.

There was a catch though…

One of the V60’s was on a pour over stand and I wasn’t using a gram scale to measure my water dose. The other V60 was on top of a gram scale, and I measured the water dose as I brewed both cups of coffee simultaneously.

And it was the weirdest thing…the pour-over-stand-cup-of-coffee was better.

My hunch is that my pour was more controlled with the pour over stand, as I could really hear how fast the coffee was dripping into the cup. It could have also been that I ultimately used less water (although I think this is unlikely because my mug was almost full, which usually means ~360 grams of water.

When I brewed with the Chemex I got a more balanced cup of coffee than what I was getting with some of the other brew methods like the AeroPress and espresso.

Even though the grapefruit and lemon acidity was still there, it was balanced out with a cinnamon flavor at the finish.

Granted, I brewed 40 grams of coffee with 720 grams of water, which took about 5 minutes and 30 seconds. The water was also still pooling.

What this would indicate under most circumstances is over-extraction. However, since this is a coffee with very high acidity, I think the slow rate of extraction was essential to making this a delicious cup of coffee.

I’m back on my MyPressi twist/espresso horse and it feels good.

The main reason I don’t make a lot of espresso is because I don’t really trust my grinder. It’s not that it can’t grind finely enough, it’s just that it tends to “lock up” with those lighter roasts.

#12 setting on my Breville Smart Grinder Pro did well though.

Pulled about 40 grams in 0:34…and it had all of the visual components of a good shot.

As far as taste goes, it was very bright lemon acidity. Not bad, but not something I would specifically seek out. Interestingly, it did brilliantly as a mocha (which my fiancée requested). Wouldn’t expect those bright flavors to play nicely with milk and chocolate, but I guess that’s what was needed to balance the whole thing out.

This is a coffee with high acidity, but very good acidity when extracted properly. The acidity is characterized by citrus notes more than berry or deciduous acidity.

Usually not my favorite, but I thought it had a nice sweetness to it, kind of like perfectly sweetened grapefruit juice or lemonade.

This coffee’s aftertaste was usually characterized by cinnamon and vanilla notes, assuming that it was properly extracted. Otherwise, the brightness dominates at the forefront and at the finish.

The aroma was delicious with floral and vanilla elements.

It found it to be tricky to get a balanced cup of coffee when brewing the Kiriani AB. It typically needed longer extraction times with finer grind settings to bring out its fully balanced flavor.

It was certainly heavier on the acidic side, but still pretty balanced overall with those cinnamon notes at the finish.

With a slow extraction this coffee had a nice syrupy body that I would say is damn-near-perfect.

Grapefruit, cinnamon, and lemon was the extent of the complexity I was able to find in this coffee. Tandem had a small flavor profile for the Kiriani AB as well.

I loved the flavors in this coffee when it was brewed correctly. Bright, yet alarmingly sweet in conjunction with the easily soured citrus flavors.

I found the Kiriani AB to be a little bit tricky to dial away from the potentially overbearing acidity. It took several attempts before getting it right every time I switched over to a new brew method.

The sweetness is really there when it’s there, if that makes any sense. I guess what I mean to say is that once you brew a balanced cup of the Kiriani AB, you will be overjoyed with the level of sweetness.

I found this coffee to be best as drip coffee, just as Tandem said. But as you can see, I didn’t really brew with any immersion methods. I was also quite surprised by the espresso quality. I didn’t love it when it was straight, but I thought it mixed very nicely as a mocha.

So that’s my review of the Kiriani AB from Tandem Coffee Roasters. May seem silly to have written 1200+ words about one little coffee, but I like reflecting on this coffee’s deliciousness.

Sweet citrus isn’t something that you find very often, so I consider the flavor of this coffee top-notch if you’re willing to work with it a bit. I think it does particularly well as drip or AeroPress, but it would probably do well in immersion methods as well.

If you’re looking for a lot of complexity in your coffee with little effort, this probably isn’t the coffee for you.

It’s flavor profile is simple and often difficult to fully capture. therefore its probably only best for those who can quickly troubleshoot a bad brew.

You can buy the Kiriani AB directly from Tandem Coffee Roasters here.