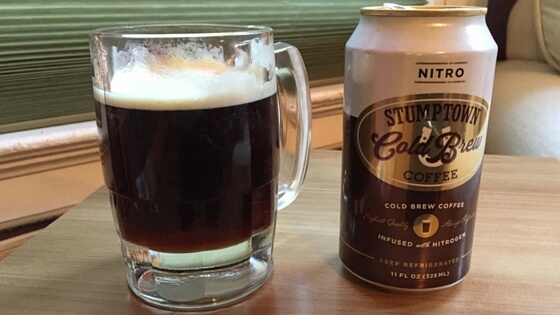 Stumptown’s Nitro Cold Brew was probably my most sought-after coffee drink of 2015.

When I found out that Stumptown Coffee was offering a nitrogen-infused version of their delicious cold brew coffee in RTD form I had to get ahold of it.

Unfortunately, it took months and months for me to find it at my local Whole Foods. I’m talking a half-year wait here (I almost gave up on trying to find it).

But it finally showed up! 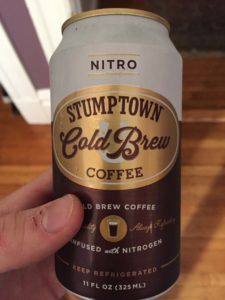 I’ve seen fewer sights that are more beautiful than this one in a grocery store…but how did it actually taste?

So how would I rate Stumptown’s Nitro Cold Brew? And how does it stack up against the competition?

Well, as far as I know this is the only nitrogen-infused RTD cold brew coffee on the market. So props to Stumptown on this.

Still, “first-to-market” isn’t one of the rating categories I use to quantify my cold brew. You can learn more about how I rate cold brew and other RTD coffee here.

I was expecting something with a lot of brightness and incredible mouthfeel.

I guess expectations can be dangerous, because Stumptown Nitro has neither.

But since this is supposed to be something different, I can’t give it a high mark, because there is virtually nothing unique about the taste.

I think I got mine on sale for under $4, but I believe that it normally retails for around $4.50.

Given that all of their other cold brew options are just under $4 and taste better, I think the price is quite frankly way too steep for a mere 12 oz of cold brew coffee (probably less given the nitrogen infusion).

Well, the key ingredient here (nitrogen) seemed to be lacking. Wait, can you even call nitrogen an ingredient?

In any case, I can’t knock on Stumptown too much for this one because they still bring you pure cold brew coffee with no extra B.S.

While it did take me at least half a year to finally grab a can for review, I think it’s more widely available than I may have led you to believe.

Any RTD drink that has made it into Whole Foods is doing pretty well for itself in this department.

So there you have it – that’s Stumptown’s Nitro Cold Brew!

Should you try it? Well, that depends.

If you’ve tried all of those before and loved every single one of them, then sure, give this a try if you don’t mind spending almost $5.

Otherwise, I think I would only get this drink again if it was served straight out of a kegerator at Stumptown Coffee itself.