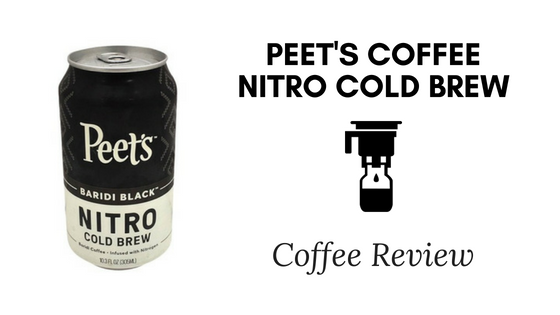 When Peet’s Coffee acquired Stumptown Coffee a few years ago, coffee fans engaged in some heavy speculation about what would happen with both companies in the aftermath.

Now that we are several years post-acquisition, it seems a bit clearer.

Peet’s is going hard in the ready-to-drink cold coffee space (I can’t believe this is even a “space”), where Stumptown was already seeing a lot of success.

Peet’s has since created its own versions of Stumptown’s popular cold brew coffee drinks.

Today’s review is yet another comparable offering from Peet’s new lineup of RTD drinks, the Nitro Cold Brew.

After a disappointing experience with the sugary, artificially-tasting Coffee Au Lait, Peet’s Nitro Cold Brew was a nice return to the basics.

There is a nice velvety mouthfeel from the Nitro, though I wish the body was a little bit more accentuated.

I honestly may have blown it with my pour, since the instructions say to pour fast (I think for maximizing the head). Still, considering it’s just the Baridi Black cold brew with nothing but nitrogen added, I though the taste was solid overall.

As I mentioned previously, there is only coffee and water in the Peet’s Nitro Cold Brew. I suppose Nitrogren doesn’t count as an ingredient, since it’s not listed as one.

The nutrition facts state that there are 5 calories and 5mg of sodium, but aside from that it’s all zeroes.

I picked up the Peet’s Nitro Cold Brew for $4.99 at my local Lucky supermarket.

Honestly, I think this is a pretty outrageous price to pay for a drink like this. The nitro really doesn’t add enough to the drink to justify the extra price.

I’ve seen Peet’s Nitro Cold Brew in Target, Lucky, and many other major grocery chains. I don’t expect you to have too much trouble finding it.

In fact, you will generally find all of Peet’s RTD coffee options in their own mini display fridge at these various stores.

I can’t imagine how much this exclusive display space cost them, but I’m guessing it ain’t cheap.

Of the various Peet’s RTD coffee options out there, Peet’s Nitro Cold Brew is one of the better ones.

With simple ingredients and good taste, it has most of what I would personally want in a RTD coffee. If you don’t like to drink your coffee black, then this might not be for you. However, the taste is by no means bitter, especially if your coffee palate is somewhat developed.

Despite all of these positives, the price is a complete deal-breaker for me.

At $4.99, you might as well get a nitro cold brew on tap at a coffee shop for the exact same price (or less).

You’ll get way more of that excellent nitro velvety texture in the coffee’s body, ultimately making the RTD option a distant second-place option.

You can learn more about Peet’s Nitro Cold brew and find a place to buy it here.