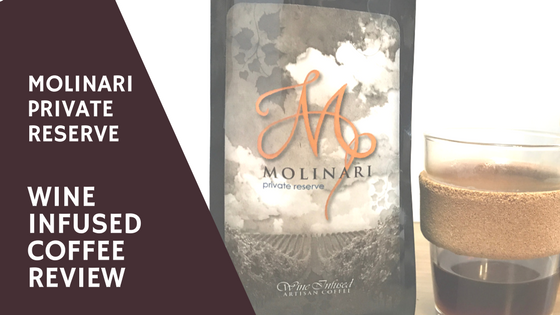 A good friend of mine picked up a bag of this wine-infused coffee from Molinari Private Reserve (Napa Valley, CA) and gifted it to me hoping I'd also do a review (he has no affiliation to Molinari).

This was certainly a new concept to me, and I really had no idea how it would turn out. But to say that I was curious would be an understatement.

Coffee has really become a lot like wine over the course of the last few decades.

Wine fans appreciate the subtleties of different grapes and fermentation processes, while many coffee fans also like to explore varieties in coffee's origins and flavor profiles.

But while there are many similarities between the two beverages and their respective industries, there hasn't been a whole lot of intersection/fusion. And I suppose this has a lot to do with the fact that coffee and wine don't really go well together.

After all, they're both generally astringent. One is typically drunk in the morning, while the other is consumed in the evenings.

But Molinari Private Reserve decided they wanted to roast some coffee beans that are infused with wine, and that's what I'll be reviewing here today.

Hey, if ketchup and eggs can work, so can coffee and wine right? OK, OK, there are better random food pairing analogies out there.

MPR is the first wine-infused coffee out there, and it took two and a half years to create.

The coffee is a blend of arabica beans that is rehydrated with red wine before being dried and roasted. The result is a non-alcoholic, dark roasted blend of coffee beans with an intense red wine aroma.

Although I think the concept is interesting, I wasn't a huge fan of this coffee.

I found it to be over-roasted, which made it too difficult to discern any of the coffee's wine-like aroma in the brewed coffee's flavor.

But those who have been following my reviews for any extended period of time know that I am not a big fan of dark roast coffee in general, so the MPR was already at a disadvantage from the onset.

Dark roast fans may want to give the MPR a try since it's certainly a novel concept, and it won't break the bank. At the very least, it would make for an interesting gift for both wine and coffee lovers alike.

You can buy this wine infused coffee from MPR (while it's still available) by clicking the button below: