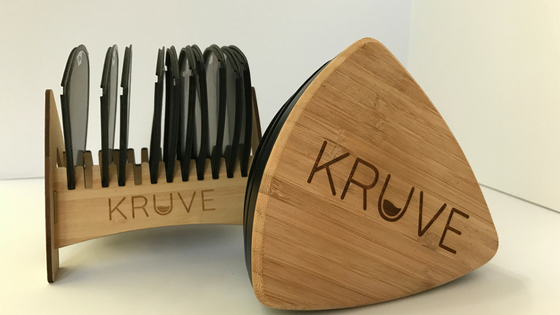 I’ve been wanting to experiment with coffee sieves for quite some time now, and thankfully a company called Kruve reached out to see if I’d be interested in giving their coffee sifter a try.

Since all of the coffee grinders I’ve ever owned are notorious for grind inconsistencies (Breville Smart Grinder Pro, Hario Mini Mill, & Capresso Infinity), I was hoping the Kruve would be my knight in shining armor for correcting this glaring issue in my daily coffee-making routine.

Please note: I received the Kruve Sifter Twelve in exchange for an honest review. I received no compensation outside of the product itself. Please also note that some of the items below contain affiliate links. This means that if you buy one of the items, at no additional cost to you, I will earn a commission on each sale. I only promote products or services that I have investigated and truly feel deliver value to you, regardless of the compensation I may receive. Please do not spend any money on these products unless you feel you need them or they will help you make better coffee at home. What the heck is a sieve or coffee sifter?

When I first started geeking out about espresso and coffee in general, I noticed there were a handful of people using strainer-like devices after they ground their coffee.

At first, I had no idea why these coffee geeks were doing this, but later on I realized these “strainers” were actually sieves designed specifically for refining the coffee grind.

As you may already know, an “even grind” is touted to be one of the most important components of a properly brewed cup of coffee. The theory behind this is that if you have the same size coffee particles making contact with the same amount of hot water, all of these coffee particles will extract at the same rate and produce the same consistent flavors.

Of course, this is just theory, but for those who are lucky enough to own coffee refractometers (the device used for quantifying the total dissolved solids of brewed coffee), the theory likely rings true.

The main thing to know is that smaller particles extract more quickly and easily, thus increasing TDS. So an uneven grind does not necessarily correlate with under or over-extraction, just inconsistent extraction.

It was pretty evident that I’d be in for a treat given how nice the Kruve’s packaging was. And my suspicions proved to be true, as the Kruve itself is definitely one of the more beautiful coffee products I’ve reviewed to-date.

On the surface, the Kruve looks like a giant guitar pick, with three black brushed stainless steel compartments, a bamboo top, and 12 sieves that can be swapped in and out for various brewing methods. It also comes in six and two sieve versions, respectively known as Sifter Six and Sifter Two.

Without the sieves added, the Kruve has a nice weight to it. The Sifter Twelve (which I received) also comes with a bamboo holder for the sieves that I was able to put together with relative ease. Definitely a nice touch to an already very sleek product.

I really struggled with the Kruve in my initial experiments. Granted, I was a little bit ambitious by starting with espresso-level grind sifting.

My first use resulted in a big mess with a lot of wasted coffee.

Sure, some of this had to do with simple user error on my part. But for the most part, I would continue to have the same struggles over subsequent uses when trying to sift for espresso.

Ultimately, despite getting a consistent grind for espresso, it was always too fine and would end up choking my MyPressi Twist. I believe this was a result of the recommended sieve sizes for espresso being too small.

Bottom line: experiment with the sieve sizes. You can certainly refine your espresso grind with the Kruve, but every machine is different and therefore what works for one machine might not work for another.

Each time you use the Kruve you will inevitably be left with coffee grounds in the bottom and top chamber that are not meant to be used with the brew method you are sifting for. In my experience, this can often leave up-to 50% of the coffee grounds ineligible for your current brew.

At this point, your unused grounds are already beginning to stale, and you have to decide what you’re going to do with them going forward.

I didn’t want to use the word “waste”, since technically everybody will do something different with leftover grounds.

In fact, Marek (my contact at Kruve) recommended that I keep the leftover grounds in airtight containers to be saved for different brew methods.

And this is what I’ve ended up doing for the most part. Any grounds in the top or bottom chambers that I didn’t use for the current brew got deposited in their own small mason jars.

What’s cool about this is that you have pre-sifted coffee that you can use for a different brew method later in the day. In my experience, the right grind size and consistency was more important than the freshness of the grind itself.

The point is that you only waste coffee if you choose to waste coffee. Of course, pre-ground coffee can compromise the brewed coffee’s flavor. But then again, so can an inconsistent grind.

So you will ultimately have to choose what matters to you between the two variables of freshness and grind consistency. Or you can just grind twice as much coffee than you intend to actually brew with, and get fresh and consistently ground coffee every time.

One thing that was great about getting familiar with the Kruve was my correspondence with Marek, one of the company’s executives. Marek offered some excellent tips on getting the most out of the Kruve, which definitely made a difference for subsequent use.

One of these tips, as I mentioned earlier, was to re-grind “boulders” (read: larger grinds that don’t pass through the first sieve.

Honestly, I had never thought to try this, but it did seem to work to some limited extent.

Another tip I received had to do with preventing coffee grounds from sticking to the sides of the different grounds chambers. Simply tapping the side of the Kruve’s body after shaking seemed to work well for this.

The last tip, which I mentioned earlier, has to do with recycling your sifted grounds.

Just take your leftover grounds from the top and bottom chambers and store them in their own respective airtight containers.

I’ve personally been using small mason jars for this, and it’s honestly way more practical for hopping between brew methods than making actual adjustments to the grinder.

Sifted coffee vs. un-sifted coffee, is there a taste/extraction difference?

Although I’m not rich enough (yet) to own a refractometer for measuring extraction, I did make sure to split-test my results with sifted and un-sifted coffee, and here’s what I found:

Kruve coffee has a “smoother” taste.

Honestly, I hate using this word to describe coffee, but I’m not sure how else to describe it. The mouthfeel was certainly one of the most improved components of the coffee I sifted with the Kruve.

I’d also say it reduced the coffee’s flavor complexity a bit, but not at the expense of the overall flavor.

If you watched my video review you will have seen that in the blind taste I conducted, I seemingly preferred the unsifted coffee.

I was a little bit frustrated with this result, because it didn’t align with my anecdotal experiences where the sifted coffee was better. Yes, I had a confirmation bias but I didn’t let it change the results.

Fortunately, one of my perceptive YouTube followers noticed that the labels of the blind samples got switched while my eyes were closed.

What this means is that although I though I had preferred the unsifted coffee, what I was actually drinking was the sifted coffee.

Still, this was just one small experiment that I wouldn’t say was conclusive by any means.

More tests will follow, and I’ll be sure to update this review when I have them.

The Kruve currently comes in 3 models and 3 different colors. The only difference between each model is the number of sieves that come with the Kruve itself.

The models are as follows:

The Sifter Twelve, which I reviewed is frankly a little overboard for most, but can really get you a specific grind size.

Sifter Six would probably be suitable for just about every brew method.

Sifter Two is perfect if you’re only making drip coffee.

Is the Kruve for you?

Coffee sieves are really only meant for a small subset of home baristas, in my humble opinion. Most people don’t even have the patience to grind their own beans or pour their water by hand, so it’s very unlikely that these same people would spend a minute or two sifting their coffee.

That said, for the small subset of home baristas and coffee geeks that are looking to take their coffee to the highest point, sieve sets like the Kruve could prove to be an essential tool for optimal and consistent extractions.

The real question we have to ask ourselves though is if an extremely even grind really matters that much. Sure, it may improve the extraction by some degree, but is it significant enough to add into our everyday coffee routines?

While I’m still not 100% convinced, the more I use the Kruve, the more convinced I become.

Now, if I were to compare the Kruve to other coffee sifters on the market I wouldn’t be able to tell you how much better or worse it is, since this is the first time I’ve used a tool like this.

What I can tell you, however, is that the Kruve certainly packs a lot of value through a large range of sieve sizes and beautiful, solid construction. In other words, it’s an excellent value when compared to other coffee sieves on the market.

So if you’re frustrated with grind consistency but don’t want to invest in a new grinder, then the Kruve just might be the solution for you. Not only is it less expensive than a high quality home grinder, but it also takes up far less space.

Get your own Kruve directly from their website here.

If you own the Kruve and have some experience using it, please let us know what you think by leaving a review in the comments section below.

Questions or general comments? Leave those in the exact same place!