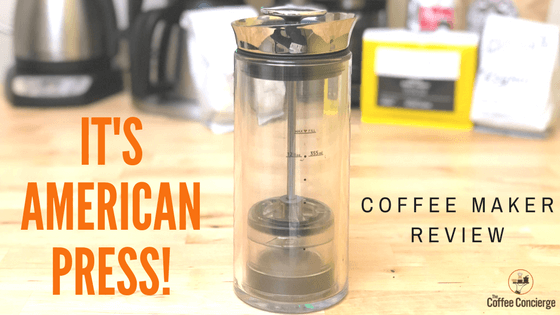 Disclosure: I received the American Press in exchange for an honest review. I received no compensation outside of the product itself.

Please also note that some of the items below contain affiliate links. This means that if you buy one of the items, at no additional cost to you, I will earn a commission on each sale. I only promote products or services that I have investigated and truly feel deliver value to you, regardless of the compensation I may receive.

Please do not spend any money on these products unless you feel you need them or they will help you make better coffee at home.

It’s pretty rare when a coffeemaker comes along and uses a completely new brew process to whip up a cup of coffee. But It’s American Press

, which I’m reviewing here today, is one of those rare and revolutionary coffeemakers.

There’s nothing too fancy about the American Press

either. It consists of 4 pieces (effectively 3 when fully assembled), uses no electricity, and comes with no extra accessories.

But once you watch the American Press

in action for the first time, it’ll likely be unlike any coffee maker you’ve ever seen. The coffee brews from the bottom-up, almost like anti-gravity.

And since it’s so hard to describe, I might as well just show you with this GIF I put together:

is the right coffeemaker for you.

What Is It’s American Press?

And I know that heading sounds like improper grammar, but the coffee maker is actually called It’s American Press (maybe so it’s less ambiguous when being searched for on the internet?).

is not just any coffee maker, it’s a french press re-imagined. Instead of pressing coffee slurry down into the bottom of a carafe, the American Press presses contained coffee to the bottom of the carafe.

This not only makes clean-up much easier, but the pressure of the water against the compacted ground coffee helps facilitate a quicker and more complete extraction, in less time than a french press brew.

It’s American Press is another crowdfunding success story, this one specifically coming from Indiegogo, where Alexander Albanese (the coffee maker’s inventor) raised a whopping $178,825. This was 450% of his goal, so to say It’s American Press was a success on Indiegogo would be an understatement.

OK, let’s break down each of the rating categories I use to review coffeemakers like It’s American Press.

You can learn more about how I review coffee makers here.

For a manual coffee maker, the American Press is quite expensive.

Still, it can be helpful to know why the American Press costs what it does, as well as look at the bigger picture when considering its overall value.

American Press is not only made up of high-quality materials like double-walled Tritan and stainless steel, but it’s also created by a small startup that brought the product to life exclusively through personal savings and crowdfunding. As such, small run production costs coupled with expensive patents have played a big role in the relatively high price tag.

Sure, to the end-consumer these things might not matter much at a surface level, but the reality is that owning a product created by a small business can have unforeseen benefits.

For example, if you have an issue with It’s American Press, you’ll likely be receiving support directly from their CEO, Alexander Albanese. You can’t say the same for cheaper manual coffee makers out there, and this can be a big deal for many.

So yeah, for the price alone, American Press

is a tough sell. Once you use it and start to understand its value however, the price can be easily justified.

Of course, this could simply be dumb luck, but considering I’ve brewed with this coffeemaker more than 50 times over the course of my ownership, I’d say that the American Press

does more than most coffeemakers when it comes to bringing out the best in a bag of high-quality coffee.

The one thing you have to be careful with is using too coarse of a grind, as under-extraction (sour/weak coffee) can be very easy with the American Press

. I’ve found that over-extraction (bitter/dry coffee) is more difficult, even with a grind that’s too fine.

isn’t completely free of it, but there is much less than what a french press would give you. It also depends on how fine your grind is. Naturally, if you have any fines in your coffee that are smaller than 100 microns, you’ll get some sediment.

The American Press is made from only 3 different materials, all of which are pretty high-quality: stainless steel, Tritan plastic, and silicone.

Tritan is the same material that’s used in baby bottles, Camelbaks, and Nalgene bottles, so it’s food safe and BPA-free. Tritan is actually even more expensive to manufacture than glass.

The silicone is medical grade.

Materials aside, the carafe is double-walled so you don’t have to worry about burning your hand when pouring.

And there is really only 4 pieces to the entire coffee maker, so it’s definitely well-designed for simplicity. The materials are some of the best you can find in a manual coffee maker.

It’s American Press is very easy to use, assuming you get the grind right, which is pretty much a challenge with every brew method out there.

However, grind is even more important with It’s American Press

, because if you get it wrong, you’ll either be pressing way too quickly or practically breaking your wrists with too fine of a grind.

The latter scenario could be an accident waiting to happen, so be careful if you find yourself in this situation.

To me, the ease of cleaning is one of the most underrated features of It’s American Press

You see, with a french press, you have to scoop out the grounds from the bottom of the carafe when you’re done brewing.

With the American Press however, simply unhinge the bottom of the pod and dump your used grounds into a receptacle of your choosing. From there, a little bit of rinsing in the sink is all you need to do before you’re on your way to brewing a fresh cup (or two) of coffee again.

I have only experienced once small issue with It’s American Press during my trials, and it was a boneheaded user error. You see, there are actually two filters that make up the pod.

One at the bottom of the pod, the other at the top.

I didn’t notice the top filter fell out before I decided to brew up a batch, which resulted in quite a mess. Fortunately, after contacting the American Press team about my issue, they informed me my top filter had likely fallen out.

Again, this was user error. So I have full confidence that as long as I don’t lose the top filter, the American Press will last me a very long time.

Sure, it’s not the prettiest out there, but it’s by far the ugliest either. Aside from the time it took me to measure the beans and boil the water, the whole brew takes about 2-3 minutes. It is more hands on, but this is a very quick brew process assuming you get the grind right (read: not too fine).

An important thing to note is that American Press has been lab-tested against similar brewers to yield a higher extraction in a shorter amount of time across the same coffee and grind size.

This makes it one of the faster options out there for brewing a quick cup (or two) of SCA Gold Standard coffee.

Although there’s really only one way to brew with It’s American Press, coffee isn’t the only thing that you can brew with it.

You can also technically get a bit more versatility out of It’s American Press by altering your pressing speed.

The fact that you have complete control over the coffee contact time, pressing speed, and grind, coupled with the fact that the coffee maker is so damn portable is what makes American Press truly one of the most versatile coffee press’ out there.

Whether you’re looking for tea, cold brew, or just a standard cup of SCA Gold Standard coffee, American Press has you covered.

It’s American Press is definitely one of my favorite new coffee makers of the last few years.

It’s fun to watch, easy-to-use, easy to clean, portable, and most importantly makes great-tasting coffee. It’s American Press is an excellent option for french press lovers who are looking for a coffee maker that makes less of a mess when it comes to clean-up and the coffee itself (minimal sediment).

It’s not for everybody though.

If you require more than a couple of cups of coffee at a time, It’s American Press isn’t going to be your most practical option.

It’s also not very budget friendly when compared to other popular manual coffee makers on the market, and it’s price tag alone may be a deal-breaker for many.

Having said that, It’s American Press

is built-to-last. So if you do decide to give it a try and are pleased with the results, you should be in good hands with your morning coffee ritual for many years to come.

If you have any comments or questions about the American Press

or would like to leave your own review, please leave those in the comments section below!