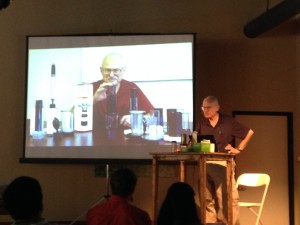 When Alan Adler invented the Aeropress coffee maker in 2005, he had never imagined it would breed a cult-like following.

After all, he had only ever wanted to make a single cup of coffee that not only tasted delicious, but was also easy to brew. But given just-how-delicious the resulting coffee from the Aeropress is, it’s not too hard to understand why there is such a growing fascination with this simple coffee maker.

My History with the Aeropress

I first discovered the Aeropress when browsing coffee making equipment on Amazon. Frankly, I was looking for a new brewer to review and this one had already garnered thousands of positive reviews. Yes, thousands.

Even more shocking than the fact that this coffee maker had come from Aerobie (you know, those weird rubber frisbees you may or may not have played with in the 90s) was the low price point.

At just $25 I knew I could afford to give this coffee maker a shot. I remember how excited I was when it finally came in the mail.

It lived up to the hype

I initially used it according to the manufacturer’s instructions. I brewed the water at 175˚ F, put two scoops of coffee in, and stirred for 10 seconds after filling up the water to the appropriate line. I pressed it, and I drank it.

And then, I got snobby

Over the course of owning the Aeropress I heard from a lot of so-called experts that there were certain ways to use it.

Secondly, using the Aeropress right-side up does not yield superior coffee. However, if you use it upside-down (inverted) you’ll get an other-worldly cup of Joe.

Third, “let it bloom!” Then, pour the rest of the coffee and let it bloom some more.

I think it was at this point I let some others try my Aeropress creations. Suffice to say, they were not impressed.

“It tastes like gasoline,” my girlfriend would say. “That one,” my sister would say in a blind taste test while pointing to the cup I poured with a Hario V60.

My Aeropress creations simply were not the best. In fact, they may have been the worst. And here I was still fooling myself into thinking I was making great coffee with it.

Listening to Alan Adler at Coffee Con SF changed everything 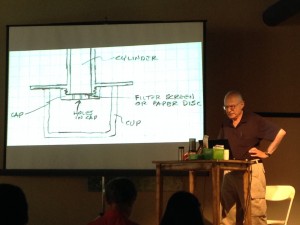 The first time I ever brewed with the Aeropress, I followed the out-of-the-box instructions. I remember liking the result too.

The steps Alan Adler takes to brew his Aeropress coffee

Oh, and if you were wondering about the inverted method

Mr. Adler was adamant that this was the way you shouldn’t be using the Aeropress. Going back to the longer saturation time, he is convinced that inverted Aeropress’ result in more bitter coffee.

The most interesting story he told to support this theory was when he referred to the World Aeropress Competitions held around the world (yes, they DO exist).

He said that any barista/competitor who had used the inverted method never won a tier of the competition. And in case you were wondering, all the judging was done blindly.

Here’s a video of one of these Aeropress competitions:

So re-think your Aeropress brew

If you like the way your Aeropress coffee tastes as it is, go ahead and stick to it. But keep in mind that this is how the inventor himself makes his coffee with the Aeropress, so you might want to give it a try to see if it improves things for you.