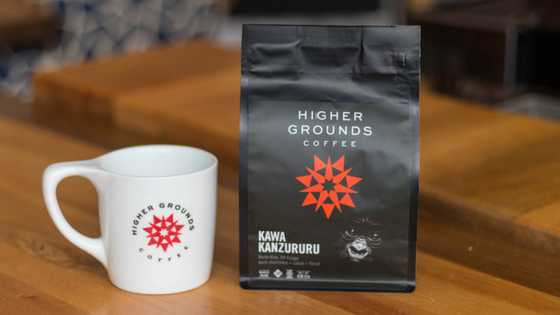 Feels good to be back with a fresh coffee review for ya'll! I've been pretty busy working on some general website-related stuff, and unfortunately my reviews have taken a backseat until now.

This Congo Kawa Kanzururu (2018) from Higher Grounds Coffee (Traverse City, MI) was brought to me through my Mistobox coffee subscription.

The coffee is a light-medium roast single origin from (you guessed it) the Democratic Republic of Congo, and there is a social cause behind purchasing a bag of this coffee.

Sales of the Kawa Kanzururu directly support the Virunga Alliance, an organization that was established to protect Virunga National Park and its inhabitants from poachers, illegal loggers, and conflict.

Virunga National Park, a UNESCO World Heritage site and Africa's oldest national park is home to a quarter of the world's endangered mountain gorilla population. So by supporting the Kawa Kanzururu cooperative and its 900 farmers, you're also playing a small part in protecting this endangered species. My first brew was with the American Press, and it tasted under-extracted because of its intense lime acidity.

The thick body was still present, but the coffee's flavor itself could have benefitted from a lot more natural sweetness that I think was hidden when brewed this way.

My results were all over the place when I brewed the Kawa Kanzururu as drip.

I got everything from lime-like acidity all the way down to a dark chocolate earthiness. The Kalita Wave was probably my favorite of the drip methods I brewed with, since it brought out extra body and balance, while still maintaining some of the original acidity that was stronger in brew methods like the Chemex.

My goodness, the Kawa Kanzururu makes one fantastic espresso.

I pulled my first shot on the #7 setting of my Breville Smart Grinder Pro 13 days post-roast and I don't think I could have had a better result.

I eyeballed both the dose (amount of ground coffee in the filter basket) and the output (actual brewed espresso), but no regrets! I got a massive amount of chocolate flavor that had coconut undertones. Very sweet, and a total contrast to some of the results I was getting as drip coffee.

After a nice long hiatus from reviewing coffee, the Kawa Kanzururu was a great one to dive into. Sidenote, I wrote the word Dive while listening to Dive by Beach House (enjoy those visuals):

I was especially excited to have the opportunity to try a coffee from a country whose coffee I have very limited experience with. Knowing that I'm playing a role (albeit, a very small one) in preserving Virunga National Park and its endangered inhabitants made the coffee that much more enjoyable.

I could easily see myself purchasing this coffee again for espresso alone. As drip coffee, I'd brew the Kawa Kanzururu more selectively. I particularly enjoyed it when brewed with the Kalita Wave…American Press, not as much.

You can buy the Kawa Kanzururu from Higher Grounds Coffee (while it's still available) by clicking the button below: