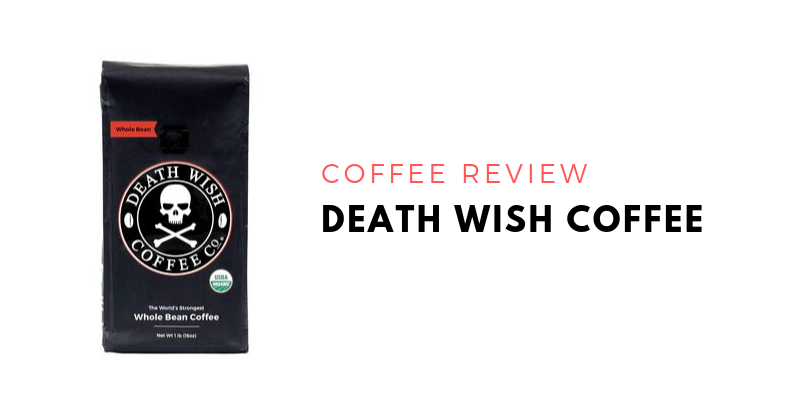 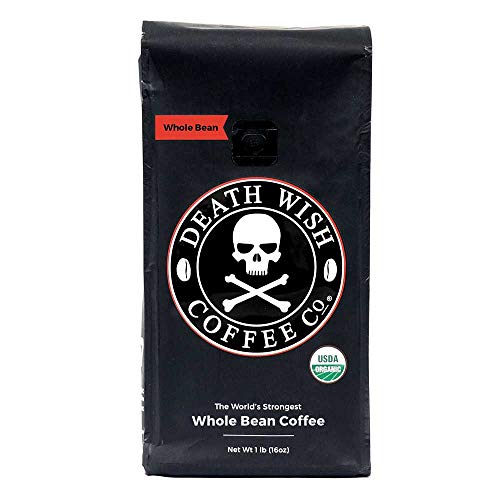 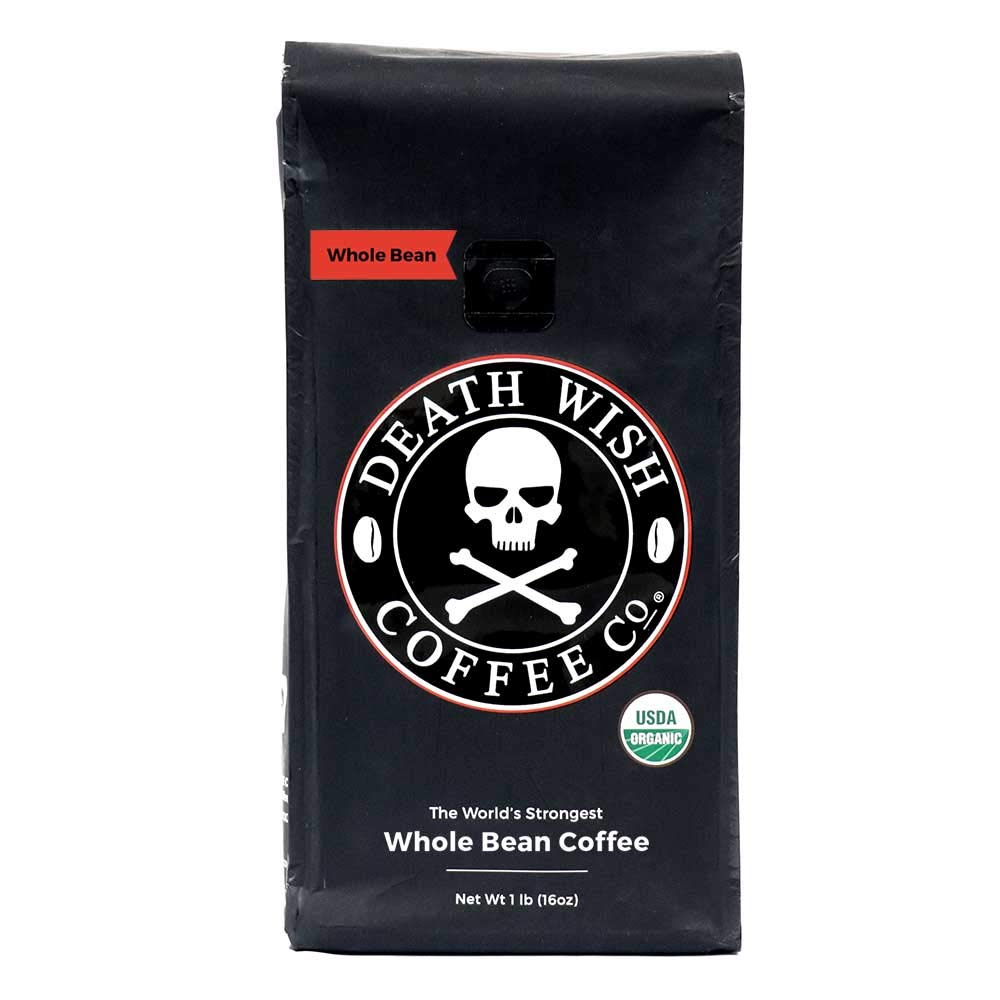 Today I’ll be looking at Death Wish Coffee, a dark roast coffee blend that is notorious for its extremely high caffeine content.

If you’ve been following my coffee reviews for a while here at The Coffee Concierge, you may have noticed that I don’t review too many dark roast coffees.

What is Death Wish Coffee?

Death Wish Coffee is a blend of arabica and robusta beans, primarily grown and processed in Peru and India.

It is a very dark roast, with roughly 2.5 times the amount of caffeine of a “typical cup of coffee”.

Death Wish Coffee claims to be the “World’s Strongest Coffee”, but as we’ll see later in the review, this claim is merely a marketing tagline that is unsubstantiated.

Who Death Wish Coffee is For

To the undiscerning coffee drinker who has built up a strong tolerance to caffeine, Death Wish may be worth a try.

Who Death Wish Coffee is NOT For

If you value taste over caffeine, there are far better coffee options out there.

Death Wish also isn’t the coffee with the highest caffeine content on the market, so if that’s most important to you, you might want to look elsewhere.

My first exposure to Death Wish Coffee was during Super Bowl 50, where they aired this ad after winning a competition that Intuit hosted: 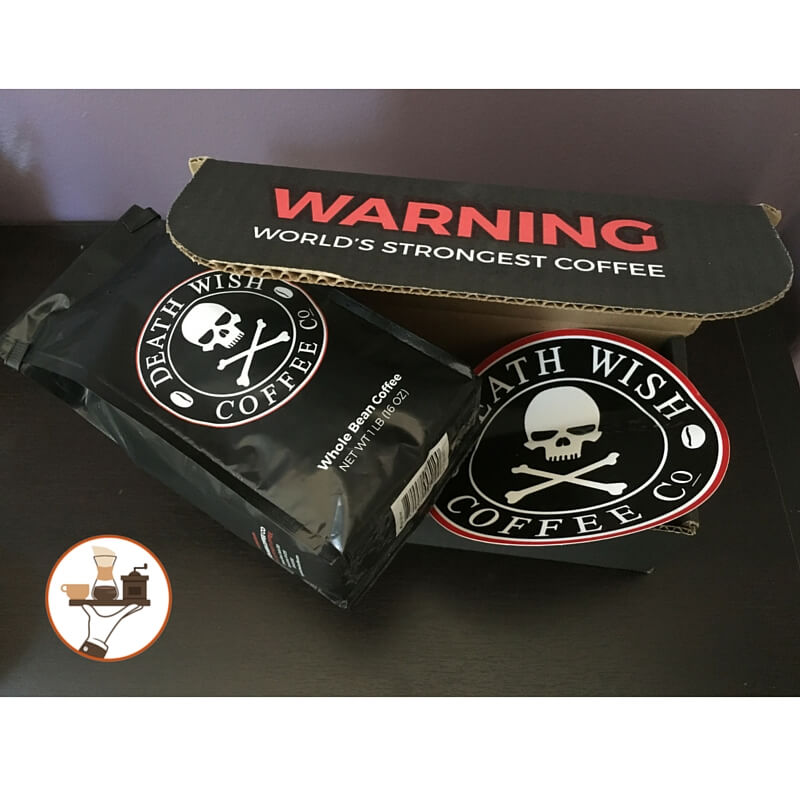 Strong can be interpreted in different ways when it comes to evaluating coffee, but in this case, “strong” refers to the coffee’s caffeine content.

Death Wish Coffee has twice the caffeine as your typical cup of coffee.

Of course, there is no such thing as a “typical” cup of coffee in my world, but I guess we can just assume that Death Wish is comparing their dark roast blend to one that uses arabica beans exclusively.

If this talk about arabica beans has you confused, let me explain…

These two coffee species are:

Arabica beans are generally considered to be superior to Robusta from a taste perspective, which is largely attributed to the more limited caffeine content (caffeine is bitter).

Robusta beans have twice the caffeine content that arabica beans have.

Arabica beans also have a higher lipid and sugar content (60%), which contributes to perceived acidity and natural sweetness.

The Death Wish coffee blend includes Robusta and Arabica beans. The extra caffeine is brought out by the Robusta beans.

How Much Caffeine is in Death Wish Coffee?

Death Wish Coffee claims to be 2.5 times as strong as your “typical” cup of coffee.

I suppose what they mean by “typical” is a 100% arabica coffee.

If you’re looking for the specifics, Death Wish has 728mg of caffeine per 12 ounces cup of coffee, according to Caffeine Informer.

This comes out to roughly 60mg of caffeine per fluid ounce.

A typical cup of coffee is measured at 5-6 ounces, which means you are getting a whopping 300mg of caffeine per cup of coffee.

But is Death Wish Really The World’s Strongest Coffee?

The short answer is no.

Biohazard Coffee has an even higher caffeine content than Death Wish, coming in at an insane 928mg of caffeine per 12 ounce cup of coffee, according to Caffeine Informer.

Black Insomnia goes even further, with 1105mg of caffeine per 12 ounce cup of coffee.

And then there is Devil Mountain Coffee Company’s Black Label, which has a ridiculous 1555mg of caffeine per 12 ounce cup of coffee.

One can only wonder what the tipping point is here…

Death Wish vs. The Competition

Table could not be displayed.

Given how dark and oily these beans were, I had a feeling that I would have to brew with a coarse grind, low temperature, and thick paper filters.

And for the most part, this is exactly what I did.

I never brewed with water that was hotter than 195˚F. I frequently brewed with the Chemex and Kalita Wave to filter out the inevitable bitter compounds I expected from these beans.

I think it worked, as I rarely made a cup of coffee that was undrinkable.

To be honest, I was surprised.

I won’t break down the different methods here because I didn’t really have a particular preference.

I wouldn’t recommend it for French Press though, as there is simply way too much oil and sediment that won’t get filtered out.

I think Death Wish Coffee brews nicely with a Chemex or Kalita Wave, given the thick paper filters used with both coffee makers.

Of course, a simple automatic drip coffee maker will do just fine as well. Just make sure to grind a bit more on the coarse side. 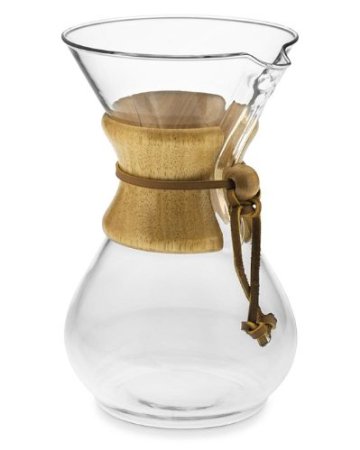 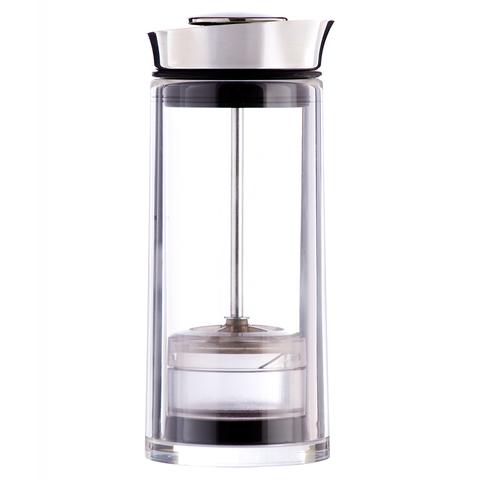 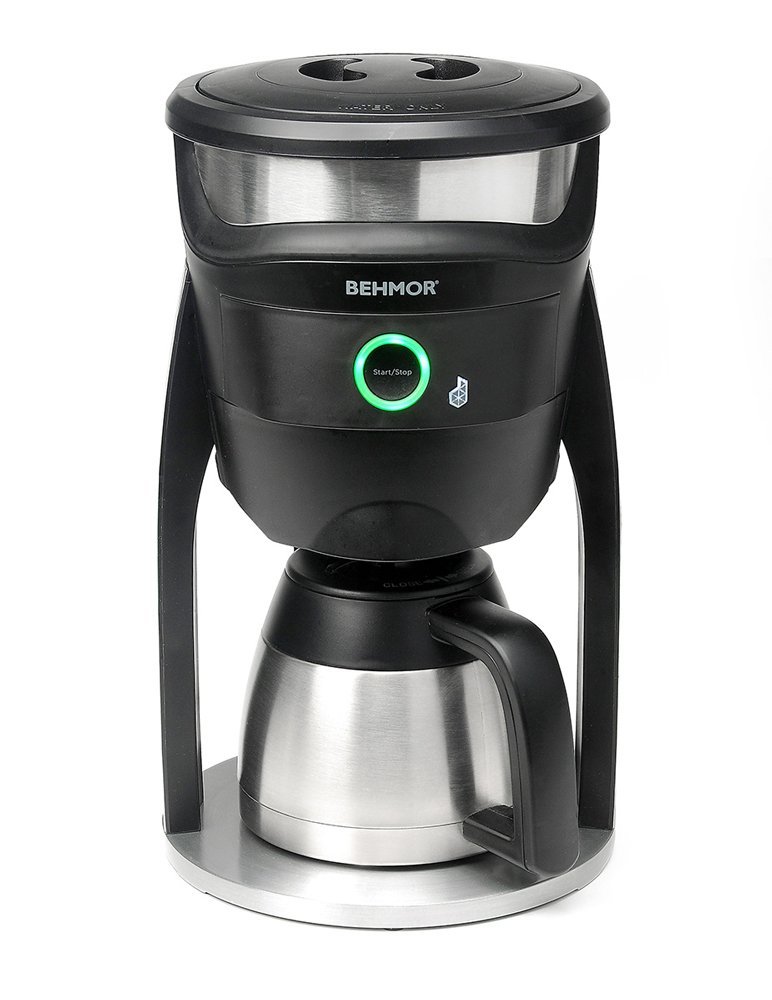 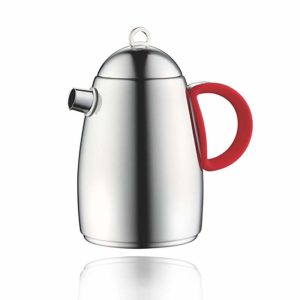 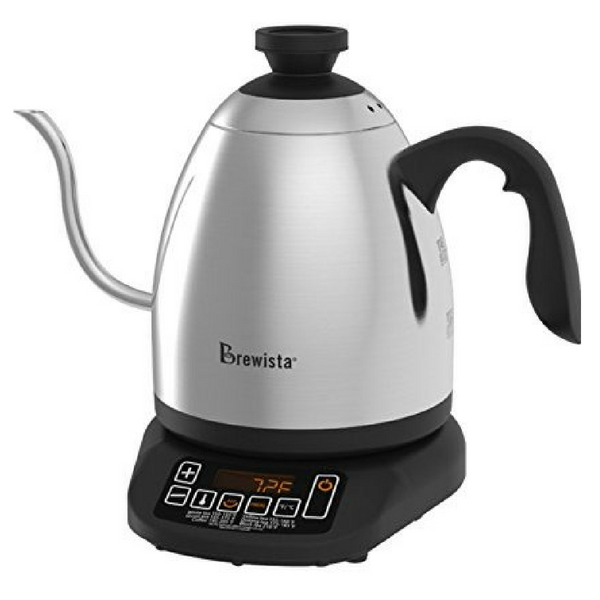 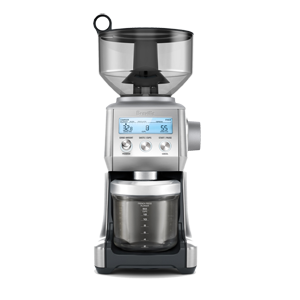 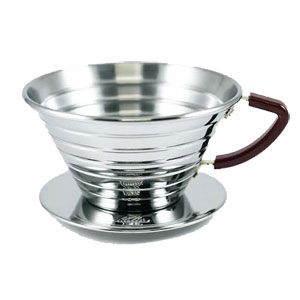 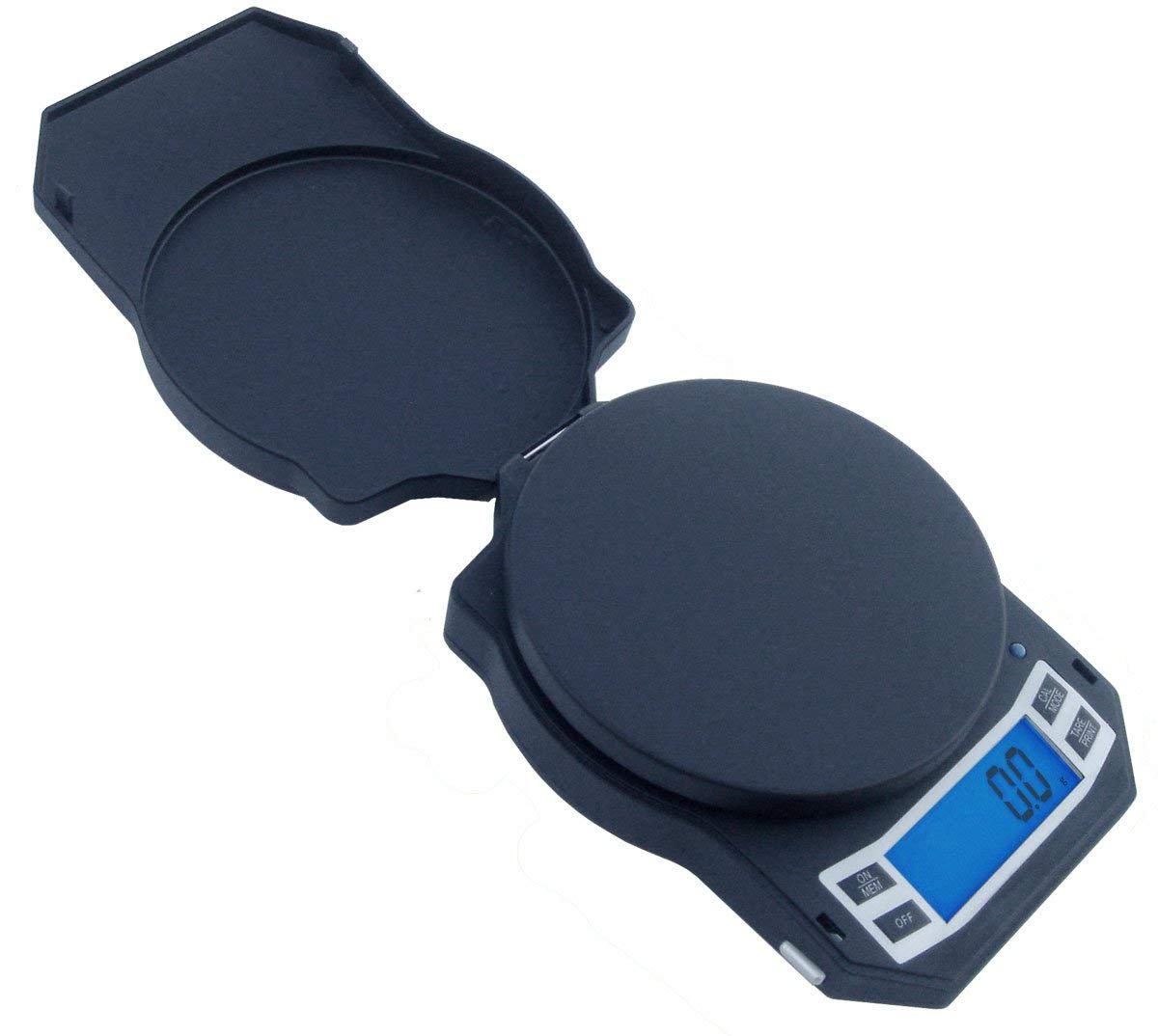 Virtually none. This was a coffee that had more nutty notes than acidic ones.

Nothing really wrong with the aftertaste, but nothing special about it either. A bit dry, but nothing I can complain about.

You’ll either love the aroma or hate it. I personally didn’t think it smelled particularly delicious. Movie theater popcorn and rubber isn’t really a good combo if you ask me.

The aroma is crazy strong though. You’ll easily smell this coffee through the box that it arrives in.

Surprisingly smooth and neutral. Given the lack of acidity, the balance shifts towards the darker, nuttier notes.

Not as much body as I’d expect given how oily the beans are. Of course, the brew methods I used had a lot to do with this. The slight dryness in the aftertaste retracts from the overall score here, but not by much.

You don’t buy this coffee for its complexity, you buy it for its caffeinated kick. If somebody tells you this tastes like a chocolate covered cherry, they either have an amazing palate, or they’re lying to you (and themselves).

Nothing really notable about the taste, but this was a pretty neutral and drinkable coffee.

This was a very consistent coffee across brew methods for me. I also didn’t have any bad brews. Maybe I was just able to dial it in more quickly?

Nothing sweet about it. Not too bitter though (I expected to have to add cream and sugar).

I didn’t experiment with enough brew methods to really rate this category. 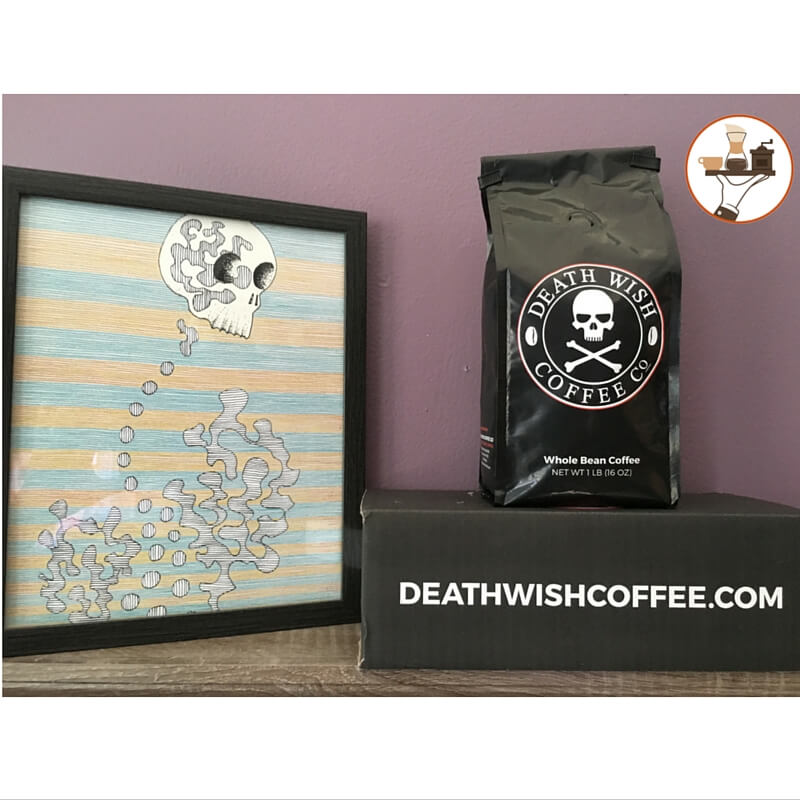 If you are not getting the caffeine pick-me-up you are seeking in the coffee you already drink, then Death Wish Coffee is definitely worth a try.

Of course, you could always drink more of what you’re already drinking to match the effect. After all, this stuff is not the cheapest coffee out there.

There’s also coffee that is even stronger than Death Wish (in terms of caffeine) if you’re crazy enough to try it. For that, my recommendation would be Biohazard Coffee.

If you’re more concerned with the way your coffee tastes than how much caffeine it comes packed with, I’d look elsewhere.

If you’ve tried this coffee, let us know what you thought by leaving a review in the comments section below.

If you have questions, I’m also happy to try and answer them. Leave those below!