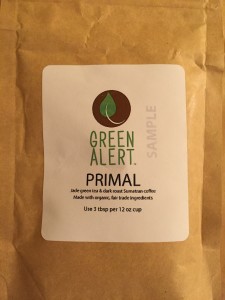 I recently received a couple samples of a new product on Kickstarter called Green Alert, which is basically a mix of coffee and green tea.

Now, I’m not usually a big tea drinker (unless I’m sick), but I was still intrigued by the concept, especially because I used to drink a lot of maté to stay alert during college cram sessions. In fact, there was a time I actually preferred drinking maté over coffee because I felt like it was much more effective at keeping me awake. Plus, these were the days I didn’t drink very good coffee.

Your initial reaction to green tea being mixed with coffee might be something to the effect of your initial feelings of scrambled eggs with ketchup, or junior mints sprinkled in popcorn, or Hawaiian pizza.

But the way Green Alert has balanced these two popular and natural caffeinated drinks actually works quite well.

The two samples I received are what Green Alert is currently offering in their Kickstarter campaign, which, by the way, ends August 7th, 2015.

From my understanding, Primal is their flagship product which consists of dark roasted Sumatran pre-ground coffee and green tea.

Refresh is the other offering, which consists of dark roast Ethiopian organic fair trade coffee and Moroccan mint tea.

While they recommend that the Primal be brewed with hot water and steeped for at least 3 minutes, the Refresh is recommended as a cold brew.

For the Primal, I used my Bonavita Immersion Dripper to allow the concoction to steep in 200˚F water.

You can see exactly what I did in this video review:

For the Refresh, I brewed with my Cold Bruer. 6 tablespoons and 24 ounces of water.

Green tea isn’t my favorite unless I doll it up with honey. Whenever I drink green tea I feel like I’m drinking a cup of hot water mixed with grass (which I guess isn’t that inaccurate).

Mixed with the coffee however, the undesirable elements of green tea that I’m accustomed to weren’t really present.

There was a little bit of bitterness, but this really wasn’t unexpected.

As for the Refresh, I liked it even more than the Primal. This is more likely a result of my love for mint teas, but I thought it was a very clever and refreshing drink that is just in time for Summer and the general cold brew hysteria that is taking over the country.

The taste mostly reminded me of girl scouts’ thin mint cookies. The coffee flavor was a little bit more masked, but this could have easily had more to do with the brew method than the blend itself.

All in all, I liked Green Alert and think it will definitely get backed on Kickstarter, especially for the modest $5,000 the creator is asking for.

There were a couple of things I was wondering about though:

My sense is that Green Alert will eventually offer more variations, but will they all use pre-ground dark roast coffee? Or will there be whole bean options that consumers can grind themselves, and perhaps different beans at different roast levels?

The last question is one that I think Green Alert will have to face quite frequently, especially if consumers think they can achieve the same results at a lower price.

Theoretically, if you have good coffee and good loose-leaf tea you could combine the two yourself (as the creator says he would do at work).

It may simply be a matter of convenience for the end-consumer, but I’d love to hear some answers to this last question.

To learn more about Green Alert, visit their website or Kickstarter campaign. Remember, the campaign ends August 7th, 2015…so make sure you back the project before then to get early access to the product if you’re interested.