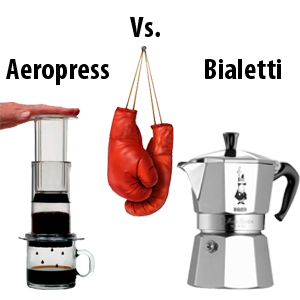 I’m going camping this weekend, and I’ll be drinking a lot of brews. No, not coffee. Beer! At Anderson Valley’s annual Beer Fest…check it out.

But I will still be needing my morning coffee, especially the day after the festival if you know what I mean. So which coffee maker should I take on my camping trip?

Well, I thought it would be fun to do a quick coffeemaker showdown between two incredibly popular coffee makers: The Aeropress and the Bialetti Moka Pot to help me in my decision.

How These Coffeemaker Showdowns Work

If this is your first coffeemaker showdown, welcome! Basically, I take two coffee makers and declare a winner amongst the 9 rating categories I normally look at in my reviews.

Ew. That looked weird with every word capitalized. Sorry about that.

The cost of both of these coffee makers is almost too good to be true. The Aeropress is a flat $25 while the Bialetti is as little as $30.

The Aeropress wins here, but not by much!

This is the big one for me. At the time of writing, I only did one taste test and the Aeropress was my favorite.

The coffee these two coffee makers produce is very similar in that they each are pretty concentrated. The Bialetti is a bit more oily and silty, like a French Press while the Aeropress is quite clean but still has a syrupy mouthfeel.

In the end, this may just be personal preference but I liked the Aeropress better. More data to come though!

The Bialetti is almost 100% aluminum (plastic handles) and is made in Italy.

The Aeropress is 100% BPA free plastic and is made in the USA.

Really, it comes down to your preference in materials here…so no winner as far as I’m concerned.

The Bialetti is very straightforward, although you do have to keep an eye on it and make sure it’s removed from the heat at the right time.

The Aeropress is also straightforward, but if you mess something up it will create a literal mess. User error is possible with both, but given the more hands-on nature of the Aeropress, I’d say the Bialetti wins here.

While the Bialetti is definitely easy to clean, there is no easier-to-clean coffee maker in the world than the Aeropress. Just push the puck out and give it a quick rinse. Done.

Again, it’s very close (why do you think I decided to do a coffeemaker showdown between these two?), but the Bialetti’s gasket/filter needs to be replaced over time.

The only thing that the Aeropress would conceivably need a replacement for is the rubber end of the “plunger.” I’ve heard of people having to replace this, but in the years I’ve own the coffee maker I’ve never had to replace it.

The Bialetti takes at least 10 minutes. The Aeropress takes less than 5, depending on how fast you can heat up your water.

I love the simplicity of the Bialetti, as well as it’s all-silver aluminum body. The Aeropress is kind of ugly if you ask me.

The Aeropress can be brewed upside down, right-side up, and maybe even sideways (ok, maybe not). You can also easily adjust your coffee water ratios, bloom, # of stirs, and pressing pressure.

The Bialetti is pretty limited though in terms of what you can adjust. You can only brew one way.

If I were to compare it to the Mayweather/Pacquiao fight, which is this weekend by the way, on any given day either one of these coffee makers could win. Of course, I don’t know the outcome of the fight yet…so that’s another story.

So for now the winner is the Aeropress, but I expect a rematch in the near future. Especially in regards to the coffee quality, which I plan to test on more people.

Buy the Aeropress on Amazon here: