The latest bag of Stumptown coffee I decided to pick up had quite a long name to match its versatility as a blend. The Guatmela Finca El Injerto Bourbon was a bright, chocolatey coffee that worked great as drip coffee or espresso.

These days, when I shop for coffee I’m only looking to see if a) it’s a coffee I haven’t tried before and b) the most recent roast date possible. I do not look at the tasting notes because I don’t want my own notes influenced by those of the roaster.

So yes, you can see that the tasting notes were citrus, milk chocolate, and clove (wish I could say I knew what clove tastes like).

I like the brief story that Stumptown draws up of Finca El Injerto. Although it’s a pretty short story, it’s nice to know about the place where your coffee comes from beyond the technical specs (region, growing altitude, processing method, etc.).

The coffee itself was a medium roast, slightly on the lighter side. The aroma had traces of butter, honey, and milk chocolate.

I experimented with a good number of brew methods with this one and although I didn’t get a whole lot of variance from brew method to brew method, the consistency in flavor and body were what really stood out to me the most about this coffee. 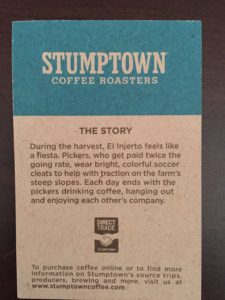 The Aeropress was the first brew method I tried the Finca El Injerto with.

I used a medium-fine grind setting for 20 grams of coffee and 256 gams of water using the standard method. My water was 175˚F.

The flavor notes I picked up were peanut, butter, and earth.

The body was heavy, and the acidity not too pronounced. Still, both were a nice quality in terms of balance.

My next brew was with my Bialetti Moka Pot. I brewed at a medium-coarse setting with 24 grams of coffee. My final cup was diluted with equal parts coffee and water.

The brewed cup had a slight almond and brown sugar aroma. The bitterness was also more subdued than it had been with the Aeropress, with much more sweetness and palatable aftertaste.

The body was really brought out nicely, while the acidity was only slightly more pronounced.

Tasting notes I was picking up were milk chocolate and cherry.

While this coffee isn’t specifically made for espresso, it came out great in my MyPressi Twist. I used 18 grams of coffee for a 35 gram yield in about 26 seconds. Brewing temperature was 196˚F.

My shot brought out the most acidity of any of the brew methods I used, and it was good quality. The body was also great, as usual.

Flavor notes were dark chocolate, cherry, and cola. I really enjoyed the shot overall, didn’t have any complaints.

Although I didn’t find a whole lot of complexity in the Finca El Injerto, it was a nice coffee to spend the week with. It reminded me a lot of Stumptown’s Hair Bender, but with an extra fruity kick.

I think this is definitely a coffee worth trying at least one time, especially if you’re brewing with immersion methods like those I used above.

If you’re brewing with pour over, I wouldn’t say you should punt, but I still think this is a coffee that’s more suitable for the French Press, Moka Pot, or Espresso machine.