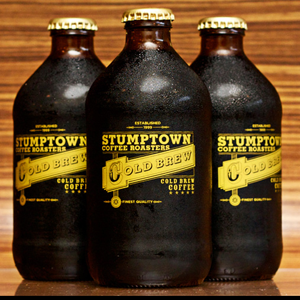 Starbucks’ Frappuccino has gone way out of style.

As addicting as those little bottles of sugary deliciousness were, most of us have moved on to more mature cold coffee drinks (I hope).

I’m talking even more specifically about cold brew iced coffee, which has become more and more popular over the last few years because of the lack of bitterness and the natural sweetness it contains.

Yes, I said sweetness. But don’t mistake this sweetness for that of a frappuccino, or you might end up really disappointed.

If any coffee roaster out there can be credited as an early adopter of the cold brew coffee brewing method, it’s Stumptown. These guys are pioneers when it comes to exceptional coffee, so it doesn’t surprise me in the least that they’ve been diving head first into the cold brew world.

So how exactly does Stumptown cold brew their coffee?

From my understanding, it’s as simple as steeping ground coffee with cold water for roughly 12 hours, and then filtering it twice.

Well, this is kind of what their website says anyway.

It had this chocolatey taste that I just loved. And overall, it was a really enjoyable drink.

But How Did it Compare to my Own Cold Brew?

I’ve been making my own cold brew a lot lately with the Bruer.

I wanted to see if I could make some cold brew that tasted better than Stumptown’s. Particularly because I’d be reluctant to spend $4-$5 for a little bottle every time I had a craving for some cold brew.

I used a pretty coarse grind, almost at a french press level for my experiment.

I had my girlfriend close her eyes and try my cold brew first. She then rinsed out her palate with some water and tried the Stumptown.

She instantly knew which one was mine and which was the Stumptown (too bad), but she said she liked mine better because the Stumptown tasted like “Gasoline”.

Now, this isn’t the first time she has used this simile when describing coffee I’ve made…so I took it with a grain of salt.

What Did I Think?

I thought she was wrong.

I tried both and thought the Stumptown was way better. I obviously used way too coarse of a grind with my own production.

So the bottom line is to give it a try for yourself before making an assessment.

Understand that it won’t taste like a Frappuccino, but you could always doll it up with some cream and sugar (I’d recommend that you try it without milk or sugar first).

I give Stumptown’s Cold Brew a full 5/5 stars. You can learn more about it here. It’s also sold in select grocery stores, like Whole Foods.