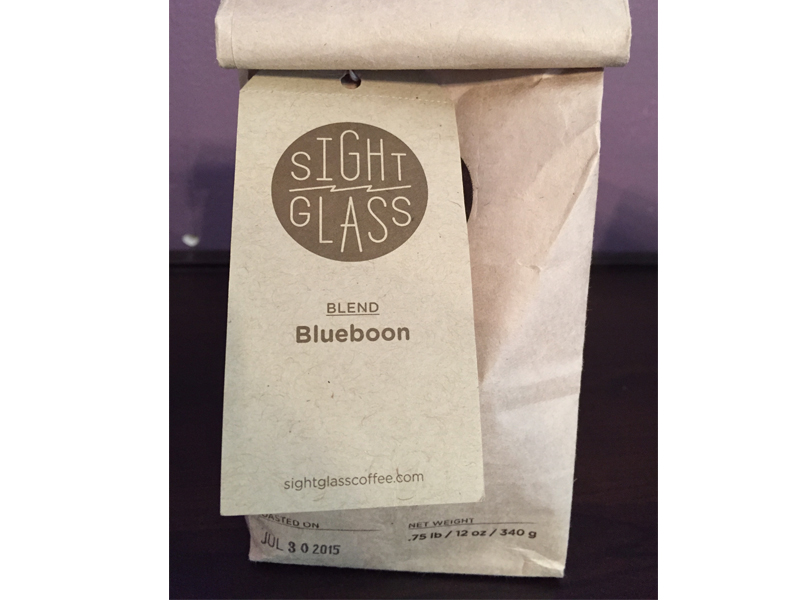 I picked up a bag of Sightglass Coffee’s Blueboon this week and was pretty impressed, despite the fact that the coffee was already more than a week past the roast date. In fact, this is probably the best bag of coffee I’ve tried from Sightglass so far.

The Blueboon is one of two coffee blends that Sightglass offers, the other being Banner Dark.

This blend features rotating coffees from different regions in order to keep the blend balanced in terms of body, acidity, and sweetness year-round. Sightglass describes it as a “versatile” coffee, and I’m not kidding this is the exact word I used to describe it myself. So…go me!

I would have liked to know where the beans in this particular bag came from, but unfortunately the best answer I could find was that it’s “seasonally varying,” as I mentioned before. 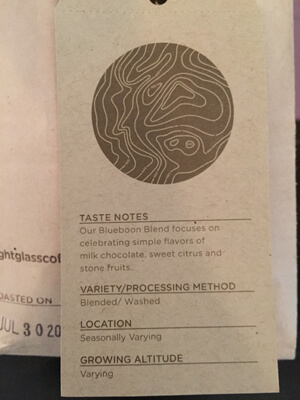 I don’t think I’ve mentioned this in any of my previous reviews, but lately I’ve been using the Angels’ Cup app to take notes on the coffee I drink and review. It has replaced my 33 cups of coffee journal because it’s digital and has a never-ending database I can refer to easily.

They also have been updating the app frequently and recently added an awesome feature where you can record your brew method and brewing parameters.

Anyways, I thought I’d share a few of my notes and observations on the coffee before it was brewed.

As I mentioned before, I played with a whole bunch of different coffee makers when brewing the Blueboon, and most of the brewed coffee was fantastic.

The AeroPress was my runner-up favorite brew method for the Blueboon, and to be honest I didn’t think any brewer had a chance to top the cup of coffee I made with my AeroPress.

The coffee came out with a nice complexity, starting with all kinds of fruity notes and finishing with a nice buttery taste. The notes I was picking up were peach, lychee, orange, and butter. It was a very well balanced cup of coffee.

I bloomed with roughly 41 grams of water and gave it a shake for about 10 seconds before pouring the rest of the water. When the water reached the top of the chamber at 236 grams, I put the cap with wet filter on, flipped, then pressed.

The Chemex was the winning brew method for the Blueboon, and I have to say this was pretty unexpected.

This time the flavor notes were completely consistent with the aroma…strawberry, blueberry, and vanilla. Slightly less complexity than the Aeropress, but the sweetness was out of this world. Overall, a very balanced cup of coffee.

I must have done something wrong with my Bialetti Moka Pot, because the cup of coffee I got was nowhere close to what I got out of the Chemex and Aeropress.

Flavor was vanilla, lemon, and milk chocolate, which was pretty consistent with the roaster’s notes. However, the coffee itself was pretty boring and had a silty mouthfeel. I might have botched it with my brew recipe, but who knows? I only brewed once with this method.

Overall, the ratings below are what I thought about the coffee across the different rating categories I’ve been using.

The Blueboon’s acidity was fantastic. Not too intense with very nice sweetness. I was picking up all kinds of fruit from brew method to brew method.

I don’t remember there being anything particularly noticeable about the aftertaste aside from the creaminess. It was pleasant though, not tainted in any instance.

It could have been because I bought the coffee more than a week after it was roasted, but I didn’t pick up a whole lot in terms of aroma. Milk chocolate mostly, but really nothing too pronounced in whole bean form.

Great body, not too heavy with a nice syrupy mouthfeel. The only time the body was subpar was when it was brewed as Moka Pot coffee.

Nearly perfect across all brew methods I used.

I’m going to have to pick up this bag of coffee again when it’s a little bit fresher, but overall, I was really impressed.

In the past, I haven’t been wowed by any of the Sightglass coffee I’ve tried, but the Blueboon was the exception.

Learn more about this blend at Sightglass’ website here.