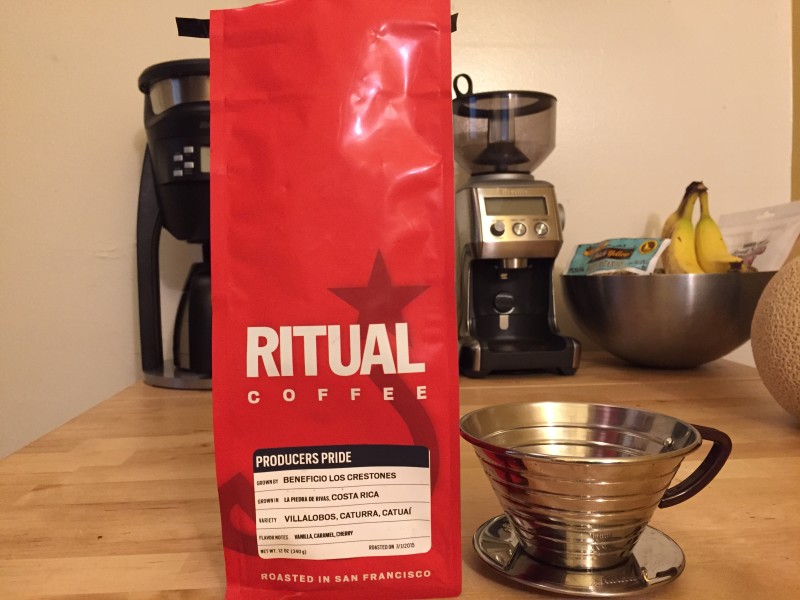 Clearly, I can’t get enough of Ritual Coffee Roasters’ awesome coffee. As I’ve noted in my previous reviews, Ritual coffee is generally bright, but they always seems to hit the right level with their roasts, as I’ve never experienced anything from them that I’d describe as “sour.”

I definitely had my ups and downs with Producer’s Pride across brew methods and parameters, but ultimately there were more ups.

The funny thing about my experience with this coffee is that because I had such good results with several of the brew methods that I tested, I didn’t want to move on to different brew methods.

In any case, I still got to try quite a few different brew methods. Here were the results:

One of the first brew methods I used was the AeroPress, which came exactly one week post-roast.

At the time, the aroma of the beans was reminiscent of peanuts. I used 18 grams of coffee, bloomed for approximately 1 minute, and filled my hot water to the #4 on the AeroPress.

The initial flavor was a little bit boring with a dry aftertaste. As the cup of coffee cooled I picked up on some cranberry notes with a vanilla finish.

I do wish I had experimented a bit more with the AeroPress for this coffee, but this was the only time I used it. 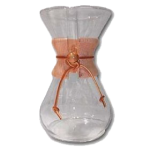 I used my 6 cup Chemex for my next brew.

The brightness was still there, but it shifted to lemon with the same vanilla aftertaste. I only brewed with the Chemex one time and didn’t take notes on the brew parameters I used.

Very similar results to those of the Chemex, but in addition to the vanilla there was also a slight chocolate aftertaste.

The Kalita Wave was my favorite and most-used brew method for the Producers Pride.

Nice complexity with flavors like cinnamon, vanilla, raspberry, and cherry.

My pour over generally took about 4 minutes with an initial brew temperature of 207˚F at a medium-coarse grind. I used a 15:1 water to coffee ratio.

I only pulled one shot and it was decent. The body was a little weak, but the acidity was really nice. I had intended to pull more shots to try and dial in on a 30 second pull, but I only ended up trying Producers Pride once in espresso form.

Here’s how I rated Ritual’s Producers Pride across the 5 categories I’m currently using.

The acidity was the best part about this coffee. Almost like drinking some tangy fruit juice, especially once the coffee cooled to lower temperatures.

The aftertaste was generally a nice vanilla, but it weakened as the coffee got farther from the roast date. It was also a little bit dry here and there.

Peanuts. Cookie dough. These were a few of the ephemeral aromas I picked up on, otherwise this wasn’t a particularly fragrant coffee.

The body was not very heavy as an espresso, but overall it had a little bit of syrupyness to the mouthfeel in all formats.

As I continue to work on developing my palate I also hope to start taking better notes and becoming more systematic when reviewing coffee.

Despite my disappointment in how I reviewed this coffee, I thought it was a pretty enjoyable coffee. I can imagine that fans of dark roasts would be disappointed with it, but if you’re looking to be a little bit adventurous I would for sure give it a try.

This is really a light roast, single origin coffee that has a surprising amount of complexity. Recommended for most!