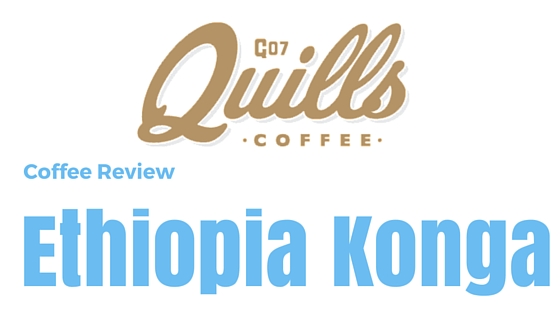 This isn’t the first Ethiopia Konga I’m reviewing, but it is the first coffee I’m reviewing from my Angels’ Cup subscription. And just like the previous Konga, this one was quite delicious.

Since I only had 2.5 ounces to play with, I didn’t get to do too much experimentation with brew methods, so this is going to be a quicker review. But I think you will come away with a feeling that Konga is a micro-region that can’t be ignored in the coffee world.

The Konga cooperative is one of 22 members of the Yirgacheffe Coffee Farmers Cooperative Union and consists of roughly 2000 farmers, according to Verve Coffee Roasters (Santa Cruz). The coffee cherries are wet-processed after being grown at 2100 masl.

Since this is a cooperative that keeps popping up this year, I hope to learn more about it in the future.

In my first tasting I brewed with Quills’ recommended brewing parameters noted in the Angels’ Cup app. These parameters are:

Personally, I decided to ignore their grind recommendation of “medium” by going with something finer. My total brew time was 3:35.

So basically, I didn’t pick up any of the same aromas Quills picked up on.

Again, no commonalities. But I had no issue with this because I really enjoyed this coffee. It was super sweet with high acidity. The body was light but pleasant.

My second brew was with the Kalita Wave. I used a higher brew ratio (accidentally):

Aroma: I didn’t take notes on the aroma, but this is likely because it wasn’t as pronounced this time around.

A bit more bitterness and a lot less complexity this time around. I definitely could have done better with this brew.

It’s tough to rate a coffee when you don’t get to brew with it a lot, but I think first impressions are still important, so here we go!

High acidity that I didn’t find to be sour at any point, even in my second brew with the Kalita Wave. Definitely one of the highlights of this coffee.

I can’t seem to escape chocolate aromas, but this was an interesting one because of its complexity. Tea-rose, black pepper, and strawberry? Talk about being all over the place.

I found every cup to be well-balanced and never crossing the line towards bitter-land or sour-land.

Light body, but very pleasant. No dryness. The mouthfeel was refreshing and appropriate for this coffee.

Lots of fruity complexity, as well as a little bit of marshmallow in the mix. I didn’t pick up nearly as much of the flavors the roastmaster picked up, but I was satisfied (on the first brew, at least).

Even when I botched things a bit with my brew recipe on the Kalita Wave it was still a good cup of coffee. However, it was much harder picking up on the intricacies of the coffee.

The lack of the great things I found in brew #1, from brew #2, make me believe that this coffee isn’t as forgiving as I thought.

If you get it right you’ll be pleasantly surprised. This is a very sweet coffee.

I can’t really rate this category because I didn’t brew across too many methods.

Is this coffee for you?

If you haven’t had too many light roast coffees with high acidity, I don’t think I’d recommend starting with this one because it isn’t really balanced out by darker flavor profiles like chocolate, smoke, or nuts.

If however, you are already accustomed to lighter roast profiles and want something that’s at the pinnacle of fruity sweetness, definitely give this Konga a try.

I found it to be sweeter than Olympia’s version, but they were definitely comparable.