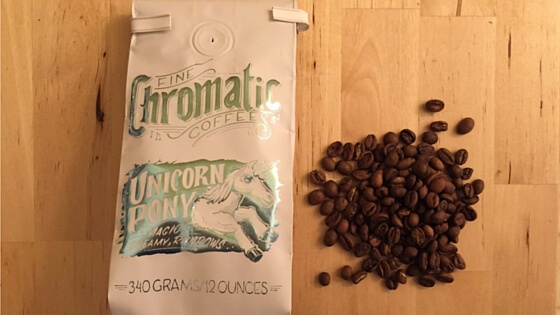 Its been 2 years since I last tried Chromatic Coffee’s Unicorn Pony Blend, so I figured it was time for a refresher.

Aside from the slightly increased price and more colorful bag, the blend still consists of two types of Ethiopian coffee beans, perhaps a little bit more lightly roasted than in years past.

Aside from this, it’s the same old fruit bomb its always been, generally only available in November and December to celebrate another year around the sun for Chromatic.

Frustratingly, the coffee has already come and gone before I could give my updated review. Still, you can hopefully use this review to help you decide if you’ll want to pick the Unicorn Pony up next year.

The rest of the 2017 review will be up sometime in the beginning of January 2018, so stay tuned!

Last week I picked up a bag of the “Unicorn Pony” anniversary blend from Chromatic Coffee (Santa Clara, CA). This is the third year that this blend of two Ethiopian beans has been available, and I have to say that I was really impressed.

Full disclosure: I mainly bought this coffee because of its beautiful bag and hyped up description, but it also had to do with the fact that the last Chromatic Coffee blend I tried, the Gamut Espresso, was delicious (thanks again for the recommendation, Margaret).

About Chromatic Coffee and the Unicorn Pony Anniversary Blend

Chromatic Coffee is a specialty coffee roaster in San Jose, CA with a nearby cafe in Santa Clara, CA. I visited the beautiful cafe a few months ago and was really impressed.

When you walk through the door the first thing you might notice is the wall to your left, which boasts a large bookshelf full of coffee gear, merchandise, and of course, beautifully designed bags of freshly roasted coffee.

To your right you will find an endless number of small tables for standing or sitting. It seems like a great environment for conversation or for getting some work done.

The barista counter is not intrusive, and the equipment is rock solid. I noticed a Mahlkonig EK43 (considered to be the best commercial grinder in the world), Bonavita Immersion Drippers (I’ve never seen any coffee shop use these for pour over), and unfortunately, I couldn’t tell you what espresso machine they were using, but my guess is that it’s a good one.

I ordered the Unicorn Pony after getting wind of it at GoCoffeeGo. Although it was pretty pricey at $19, with $2 flat rate shipping from Chromatic I felt that it was worth it ($5 shipping isn’t unusual for most specialty coffee roasters).

Unicorn Pony is a blend of Ethiopian dry and wet processed coffee from the Sidamo Province.

Unfortunately, there wasn’t too much information about this blend outside of what I’ve already written, so hopefully Chromatic will find this review in the future and help me fill in the blanks!

Unlike the Gamut Espresso, this was a very versatile coffee blend in my opinion. In other words, it worked great across all brew methods I used.

Regrettably, I wasted at least 40 grams of the bag with MyPressi (my espresso “machine”) complications. What was crazy about this coffee though is that I had even more screw ups when pulling my shots, yet even when I screwed up the shots came out tasting great.

I’m talking shot pulls in the 10 second range, which is ridiculously off. But my goodness, it still tasted great! 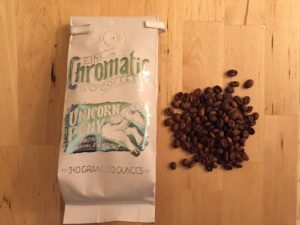 The whole bean aroma was one of the best in recent memory. Major blueberry, butter, and chocolate.

I did some dabbling with brew methods, but this bag was mostly used up through failed espresso shots and auto drip pots from the OXO Barista Brain 9 cup coffee maker.

My first brew is almost always with the AeroPress because it not only brings out the best in most coffee but it’s also very forgiving.

This time, however, I brewed with the Chemex before the AeroPress. And boy, it set the bar high (more on that later).

The mouthfeel was a little dry, but this was the only brew method where I picked up any floral notes.

I used my Ritual French Press in my second brew and the acidity and body got taken up a notch over the AeroPress.

However, the complexity was really toned down in terms of flavor.

Flavor: lemon with wood undertones and a chocolate aftertaste 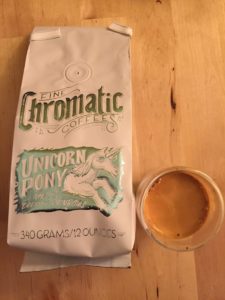 Even though I really only pulled one legitimate shot, even “under-extracted” shots like this came out tasting great:

In one of my under-extracted shots I got hints of peach in the aftertaste. Yum!

The Chemex was one of the better brews I had, and Vero was a big fan which is a big deal considering how tough of a coffee critic she is.

I didn’t take notes on this brew, but it was probably the sweetest of all of the brew methods I used.

I definitely recommend this blend for Chemex lovers.

Plenty of blueberry and lemon acidity in the Unicorn Pony. One of its better characteristics.

If anything, there were hints of milk chocolate in the aftertaste, but it was overall pretty subtle. The best aftertaste I picked up on was a fleeting hint of peach in one of my shots.

The whole beans had a delicious milk chocolate, blueberry, butter aroma. There were also hints of floral aromas here and there.

Nice balance of fruit and chocolate, but it teetered a little bit more to the acidic side of things.

Not a heavy mouthfeel at all. For espresso, I really had to go fine with the grind to get a syrupy shot.

This coffee had a little bit of variety in terms of flavors from brew method to brew method, but for the most part it was pretty consistent in terms of taste and aroma.

Tasted delicious, and everybody who got to try it was a big fan.

One of the most forgiving coffees I’ve brewed with in recent memory. I thought I was going to have to throw away more shots of espresso than I actually did (I didn’t throw any away).

Very sweet when brewed under the right conditions. In fact, I couldn’t pick up any bitterness, even in my seldom-used French Press.

It was fantastic across all brew methods. Even though the AeroPress ended up being my worst brew, I think I could get it right the second time around with a coarser grind.

If you like Ethiopian coffee, the Unicorn Pony from Chromatic Coffee is a must-try. I’d also recommend it to those who like fruitier shots of espresso, just make sure that you are using a really solid grinder like the Baratza Vario or the Rocky.

I wouldn’t recommend this to somebody who is looking for a full-bodied cup of coffee with darker, earthier notes. This is a fruity coffee with only slight hints of the “other stuff.”

You can buy this coffee at Chromatic’s website here. It’s also available at GoCoffeeGo, which is the better route if you plan to buy more than five bags of coffee at a time (shipping is free).