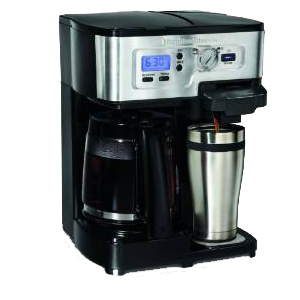 A few years ago Hamilton Beach introduced one of the most versatile auto drip coffee makers on the market: The Two-Way Brewer. The brewer was definitely one of their top-selling coffee makers, with the ability to not only brew a full pot of coffee, but also an individual mug.

Please note: Although I am reviewing this coffee maker, I don’t have any personal experience with it. Instead, for this coffee maker I’ve collated reviews from around the web to highlight the pros and cons. While I do plan to eventually review this coffee maker personally, this disclaimer will remain here until that happens. If you want to know more about how I review coffee makers, please go here.

Let’s talk about the single serve side…

Because this is the part of the coffee maker that I gather most people care a lot about, yet is frequently cited as one of the FlexBrew’s biggest flaws.

Reports of malfunction, water overflow, and lack of programmability is just the tip of the iceberg in terms of what people dislike about the single serve functionality.

However, the most frequently cited issue was the plastic/chemical taste resulting from the single serve side. It seems like the K-cup use resulted in more reports of this issue, but there were also those who didn’t use K-cups claiming the resulting coffee just tastes bad.

To me, simply hearing about other people experiencing this would discourage me from buying the coffee maker all together.

Is it for you? Probably not…

If you must have K-cup coffee, definitely look elsewhere, as K-cup users had the most issues of all the reviewers. I should also mention that you have to pierce the pods/K-cups before putting them into the machine. Seems to defeat part of the coffee pod’s main purpose.

If you must have a versatile brewer that can handle single servings as well as full pots, I would look into the Hamilton Beach 49980A Single Serve Coffee Brewer and Full Pot Coffee Maker, 2-Way. It may not have all of the features that the FlexBrew has, but overall it has fewer issues and still remains as one of the most referred coffee makers here at The Coffee Concierge.

You can read my review of the Two-Way Brewer here.