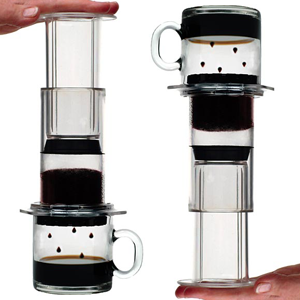 Coffee Experiment: What’s the Best Way to Brew with the Aeropress Coffee Maker?

The Aerobie Aeropress has quickly become one of the most popular coffee makers in the world. In fact, the Aeropress has become so popular that there are international competitions where baristas and coffee hobbyists go head-to-head by trying to brew the best cup of coffee using an Aeropress.

When I first started brewing with the Aeropress myself, I found a ton of information on brewing the coffee using what's known as “the inverted method.”

This basically means that the Aeropress is upside-down when the brewing process begins, with the filter cap removed.

The point of the inverted method is to give your coffee a chance to steep in the hot water for as long as you'd like. This steeping or immersion period is typical of French Press coffee, and perhaps the reason so many people do it.

The standard Aeropress method is more about a swift extraction, as the brewed coffee is actually already passing through the filter as soon as the hot water is poured into the Aeropress.

For more about the standard method, you can check out my post about how Alan Adler (the Aeropress' inventor) uses this revolutionary coffee maker.

So which way is the better way to brew coffee with the Aeropress?

That's the question I was looking to answer.

Look, I'm sure Alan Adler has used the Aeropress more than pretty much anyone out there, but does this mean that he really knows the best way to brew with it?

Similarly, just because you wear skinny jeans and an American Apparel beanie (oh wait, that's me) doesn't mean that you're an omnipotent coffee god that can flip something upside down and all of a sudden think it's that much more amazing.

So which way wins on the first test? Watch below to find out.

Warning: this is not a blind taste test, or a bulletproof experiment for that matter.

Coffee Tools Used in This Experiment

Just because I got one result doesn't mean that you won't have the complete opposite result. Everybody has his/her own taste buds, so I encourage you to run this experiment yourself and see what you find. Please share in the comments below.