I think there’s a big misconception in the coffee world: coffee that steeps longer tastes better.

When I think of steeping coffee, French Press is the first thing that comes to mind. Full-bodied, strong, oily, rich, thick, are just a few of the words I’d use to describe the resulting cup.

But is this necessarily a good thing? In other words, does steeping coffee for a certain period of time make the final cup taste better?

My hypothesis is that it doesn’t.

Of course, this is pretty subjective. But I think that people automatically assume a good cup of coffee is one where the water makes longer contact with the ground coffee. I think it’s a mistake to make this assumption without first experimenting.

So here’s what I’m going to do:

For starters, I won’t even be using a French Press to run this informal experiment.

Because the French Press uses a completely different filtration system than your standard pour-over or cup of drip coffee. I want to reduce as many variables as possible here, which is why I’m going to test a normal pour-over vs. a steeping pour-over for starters.

I’m very likely going to be doing multiple rounds of this experiment, but here’s the basic setup:

Since the Brazen Plus has a “manual” release feature, I was able to brew both cups of coffee via the Hario V60 and Bonavita in a very consistent fashion. Basically, the water comes out the same way from the Brazen into both brewers, and at the same intervals. The only slight difference is how far the water drops when making contact with the ground coffee.

For those unfamiliar with the Bonavita Immersion Dripper, it has a stopper valve at the bottom which allows you to steep the coffee for as long as you want. Whereas with the Hario V60, the water passes through the ground coffee as quickly as possible.

I elected to steep for 4 minutes with the Immersion Dripper.

In summary: it was no steep vs. the 4 minute steep.

The Hario cup was very thin and a little bit sour. It had a pretty bad aroma as well. There was really nothing that wowed me about the final cup of coffee.

The Bonavita cup on the other hand had some body and much more flavor. It was a little bit too bitter, but it was still the cup that I finished my breakfast with.

I gotta say, I’m pretty surprised with the result. Still, I’m not 100% convinced, which is why this will be an ongoing experiment.

In my day 2 test I decided to use the same coffee maker: the AeroPress.

If you read my post on Alan Adler’s talk about the best way to brew with the AeroPress then you already know he isn’t a fan of the inverted method.

For those unfamiliar, the inverted method for brewing with the AeroPress allows the user to steep the coffee for as long as they want, before pressing.

According to Alan, this produces an inferior cup of coffee because it extracts more bitterness.

But hey, that’s just like, his opinion, man (Big Lebowski anyone?).

For the first cup, I steeped the coffee for 2 minutes using the inverted method. For the second cup, I began pressing the coffee immediately (well, after 10 stirs).

To be honest, I didn’t like the final output of either cup.

The steeped cup came out pretty bitter, with nice body.

The un-steeped cup came out pretty bright, with little body.

Ultimately, I couldn’t come to a conclusion about which cup of coffee I preferred, since I wasn’t a big fan of either. I think the steeped cup actually had a slight edge, but I think I’m going to re-do this test with a different grind to see if anything changes dramatically.

I may also test a 4 minute steep time instead of 2, which I think will help me distinguish between the two cups more.

Well folk, it seems that I’ve gone a little bit overboard with how finely I’m grinding my coffee. For round 3, I used the same fine grind I used yesterday with the AeroPress. And once again, it was really difficult to suss out a winner.

Round 3 was very similar to round 1, except it was a manual pour over instead of a Brazen Plus-assisted pour over.

You can already see there were a few major differences between round 3 and round 1. I used more coffee and water this time around and a finer grind. I used the same 4 minute steep time, with a quick stir at the 2 minute mark.

I can’t believe it, but I think the Immersion Dripper has won once again. This result is completely not what I was expecting…and even with a potential confirmation bias I’m going with it.

-Both cups had very similar body. I think the fact that I used such a fine grind was responsible for this. i.e. the water passed through the coffee more slowly as a result

-While the Bonavita cup wasn’t fantastic, I didn’t have any problem finishing it off

Before I put this informal experiment to rest, I plan on testing out the AeroPress one more time at least so I can start drawing some conclusions as to whether Alan Adler is right or wrong (at least when it comes to my tastebuds). 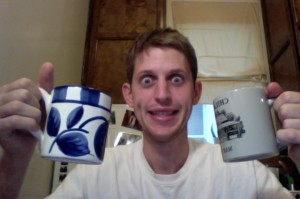 With an inconclusive result in my first AeroPress experiment, I wanted to try again but with slightly different variables.

Seeing how a 4 minute steep compared to no steep was the objective of this last experiment. Both cups had great aroma, but the taste difference was pretty noticeable as the cups of coffee got progressively colder.

While the 4-minute-steep cup had a syrupy and unpleasant aftertaste, the no-steep-cup had a very mild aftertaste with a nice brightness.

So it would seem that Alan Adler was right about the inverted method being inferior, at least from my informal unblind taste tests on myself. I will have to re-do the test on some others to gather more opinions, but for now, I’m sticking to unsteeped for the AeroPress.

As for pour-over, I think using the Bonavita (read: steeped pour over) yielded better results. Again, I will have to test this on some others.

I’m dying to know if 24 hour cold brew immersion is better or worse than a 6 hour slow drip cold brew. So this is going to be my next experiment, which will have its own post.

I’m also curious to know how French Press coffee changes at different steep times. Why is 4 minutes what everyone seems to do? Is this the best option? I’m determined to find out.

What Do You Think?

Have you ever experimented with different steep times when brewing coffee? Please share your thoughts, results, comments, or questions below!