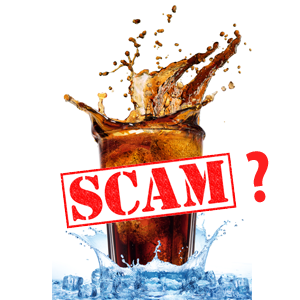 I’ve reviewed a lot of cold brew coffee this past year, and it’s not just because I’m obsessed with the stuff. Cold brew is in (in a major way). Iced coffee is out.

But why is the stuff so popular? Does it really taste that much better than traditionally brewed coffee that’s cooled down?

That’s the question I am looking to answer in today’s coffee experiment.

In order to run a good experiment it’s important to keep as many variables as possible, the same. So I took two glass coffee makers, the Chemex and the Cold Bruer, and plopped them down on the table to get the experiment started.

Next, I needed to decide on the water to coffee ratio I would be using. I decided to go with Cold Bruer’s specifications at 12:1. In other words, for every gram of coffee I added to each coffee maker, I’d add 12 grams of water.

I used the same grind for both coffee makers. Somewhere between drip and espresso grind on my Breville Smart Grinder Pro.

For the Chemex, I brewed with 202˚F water over the course of about 5 minutes (as is pretty typical with a Chemex). I then put the final brew in the refrigerator.

For the Cold Bruer I added cold water to the top reservoir and adjusted the drip rate to about 1 drip per second. The whole brew took about 4 hours as it sat in my refrigerator.

The results of this experiment were pretty surprising. Still, I was pretty disappointed given my experimenter’s bias, where I expected the cold brew to blow the chilled Chemex coffee out of the water.

Boy was I wrong.

The results were pretty much split down the middle, with the “true cold brew” from the Bruer winning in 4 of the 7 trials.

Yes, I know I had an incredibly small sample size, but what else is new?

Click here for the spreadsheet of the complete results.

You may have noticed the “tasting order” column, which had a very interesting result in my opinion.

The participants got to choose which cup they chose first, so the tasting order was basically randomized, but it worked out nicely because both coffees got their opportunities to be tasted first, and somewhat evenly.

While the Bruer didn’t win by a considerable amount in this experiment, it still won.

From this experiment, I’d say it’s inconclusive given this incredibly small sample size with split results. So it’s back to the drawing board with more trials to be tested in the future.

Tools Used in This Coffee Experiment