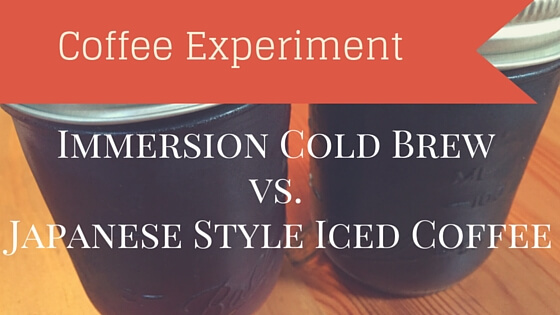 Cold brew coffee tastes great and is really easy to make, but there's just one problem:

It takes a really long time to brew.

Generally, it takes at least 8 hours and many times up to 24 hours, depending on the recipe you're using.

Fortunately, there are several cold brew coffee methods that are actually quicker than your standard 8 to 24 hour immersion method. Let's go over these methods real quick.

I've heard this referred to as Kyoto style cold brew, but I think calling it “slow drip” is appropriate here because that's what is effectively happening during the brew process.

You have your water reservoir at the top, which slowly drips into a bed of coffee generally at about 1 drip per second. The brewed coffee then eventually passes down into the final receptacle.

Common slow drip coffee makes look like giant hourglasses or something you might find in a chemistry lab. It's pretty cool.

Bruer (a kickstarter backed start-up) created a home version of this style of cold brewer a few years ago. It takes about 6 hours in total. You can check out my review of the Bruer here.

I've heard many different names for this method as well, including “flash brew”.

While this method isn't technically cold brew, it's still the fastest way to make a cold coffee drink at home. The resulting coffee can be very good too if you handle things correctly.

Basically, you brew the coffee with hot water, but the brewed coffee makes instant contact with ice in the carafe or mug.

This method should technically take less than an hour, depending on how fast the ice melts.

There are several coffee makers made specifically for this purpose, but you really don't need them as long as you have a pour-over dripper like the Chemex or Hario V60.

While I've compared slow drip to immersion cold brew in the past, I've never compared Japanese style iced coffee to any other cold brew method.

The reason I feel it's important is because of how much faster Japanese style iced coffee is.

Meaning, if Japanese style iced coffee is as good as or better than immersion and/or slow drip, why bother with the extra time you have to invest in those methods?

As usual, the sample size was small. But the unequivocally better coffee came from the immersion method, and both Veronica and I were in agreement on this one.

It's worth noting that because I made a large batch via a Chemex, the results may have certainly been different if I just did a mug's worth with a Hario V60 (which I may experiment with in the near-future).

How Do You Cold Brew?

Have you tried either of these methods? Have you compared them? Let me know in the comments below!