Coffee Experiment: How Does Water Temperature Change During the Brew Cycle? 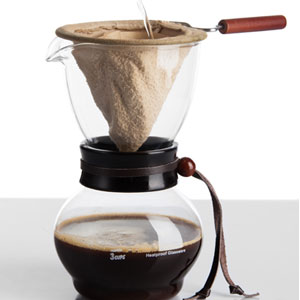 You’ve frequently stated that the optimal water temperature for brewing coffee should fall between 195˚ and 205˚F. But what you failed to explain is when that water temperature is actually being read by your fancy thermometers.

Let me clarify what I mean.

You see, I have a Bonavita Variable Temperature Kettle that I use on a daily basis for brewing my coffee at what I thought was an accurate temperature.

However, it’s come to my attention that the water that’s coming into contact with my ground coffee isn’t exactly 200˚F, even though this may be what the kettle tells me.

I understand that this may be thermodynamics 101, but what I’m unclear about is just how much water temperature drops when it comes into contact with ground coffee.

While I only experimented how brew temperature fluctuated with my Hario V60, I do think the results are indicative of other brewing methods as well. This is because the hot water is only initially touching the ground coffee bed, which is where most of the temperature drop is actually taking place.

As you may have seen in the video, my initial water temperature on my Bonavita Variable Temperature kettle was set to 207˚F. When it hit the bed of ground coffee, it was at 195˚F.

According to the SCAA, this would just barely be hot enough to brew the coffee to its full potential.

Was this just a fluke? Was my thermometer reading the temperature too slowly?

Guess it wasn’t a fluke, because the water’s temperature clocked in at 195.8˚F once again.

So maybe my thermometer was just lying to me, right? I mean, a 12˚F temperature drop is huge.

Should You Use Boiling Water?

By these measurements, boiling water would give you an actual brew temperature of 200˚F, which falls right smack in the middle of the SCAA coffee water temperature range.

But don’t the same coffee experts out there tell you not to use boiling water when brewing coffee?

Please Help Me Make Sense of This

And if you are only supposed to be brewing your coffee in this temperature range, would it be acceptable to start a pour over with boiling water?

Also, since water temperature invariably cools inside the kettle throughout a pour over, how can one ensure that they are making their coffee at the most consistent temperature throughout the brew cycle?

I’m dying to know the answer to this, so if you have a minute, please take the time to share some insight by leaving a comment below. Just click the “load” comments button!