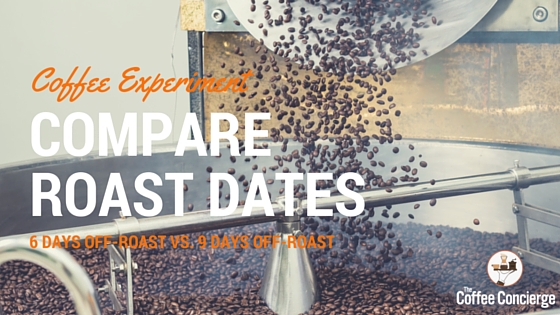 A while back one of my YouTube subscribers asked me to conduct an experiment comparing the same coffee with two different roast dates. In other words, how does coffee from the same origin and roaster change as it moves farther away from the day it is roasted?

Well, I was finally blessed with the opportunity to conduct this experiment when MistoBox graciously sent me two bags of the same coffee after one of the bags initially got lost in the mail. More specifically, they sent me Ceremony Coffee Roasters’ Decaf Espresso Blend, with roast dates that were 3 days apart.

My hypothesis was that there would indeed be differences. However, I didn’t know which roast date would pull the better shot. 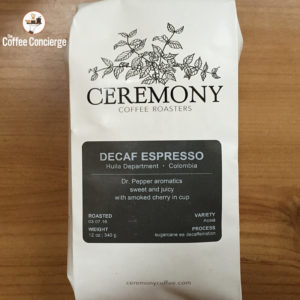 For this experiment I used the Decaf Espresso Blend from Ceremony Coffee Roasters out of various locations in Maryland. The blend consists of Colombian beans of multiple varieties, fully-washed by multiple producers.

I already got some flak for using a decaf coffee, but I think this is mostly attributed to the stigma that has been attached to decaf in the specialty coffee scene in America. I don’t really feel like trying to dissect why so many people feel decaf is inferior, so instead I’ll just say that the coffee I used is indeed real coffee, from real coffee producers, roasted by a real coffee roaster.

Ceremony wrote this about the decaffeination process (for those of you who are curious):

This lot was selected for EA decaffeination in Colombia for its clean, sweet cup profile.

The ethyl acetate (ethyl alcohol + acetic acid) used in this process is an organic compound derived from fermented sugar cane. This compound is an effective, natural solvent for caffeine extraction, leaving the coffee’s cup characteristics fairly well intact. EA is also the most prevalent ester found in beer and wine.

It’s good coffee, and in my opinion it was more than acceptable to use for this experiment .

Granted, I wasn’t using world-class equipment here, nor did I have a large tasting panel across multiple shots of espresso. So yes, this was a very informal experiment that could have possibly gone in the opposite direction in any subsequent trials.

Having said that, these are the parameters I used for the two shots:

As you may have seen in the video, shot #2 was the winner in terms of taste and aroma. Shot #1 was under-extracted with more sour notes.

The most interesting thing about this result is that despite an identical grind, shot #1 yielded slightly more espresso (0.3g) in less time (3 fewer seconds). Shot #1 also had a slightly higher temperature, which in theory would increase extraction.

Perhaps shot #1 had less gas being released during infusion given its older roast age, and as a result, there was less resistance for the water to pass through the ground coffee.

Of course, this is a big theoretical stretch…but I’ll stick with it until I have the opportunity to examine this more in the future. Not sure how I’d ever be able to confirm or disprove if this was happening or not though…

I’d also love to give this experiment a try with a fully caffeinated coffee.

Finally, using a real espresso machine with more stable temperature control would be helpful in keeping the brew parameters as consistent as possible between control and experimental groups.

I’d love to hear your thoughts and feedback on this experiment. Leave a comment below so we can continue the discussion and hopefully get the next iteration up here sooner than later.