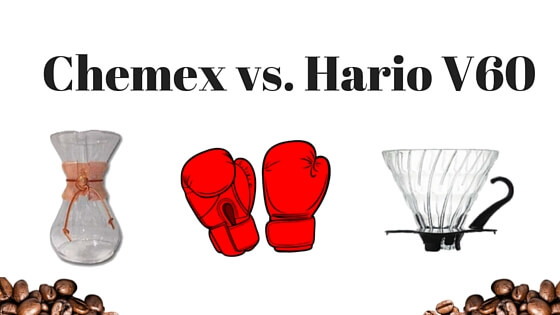 This 9th iteration of the Coffeemaker Showdown series I’m taking a side-by-side look at the Chemex and the Hario V60. It’s Chemex vs Hario, let’s go!

This is a showdown that I think will require several rounds, so for now I’m just going to publish the first round and then update this post with the subsequent rounds later on.

After all, these are arguably the two most popular pour over coffee makers out there right now, so I really have to make sure I test the crap out of this.

If you’d like to see the individual reviews for each of these coffee makers, follow the links below: 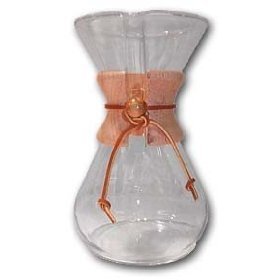 For those who are just getting to know the Chemex

, you are likely curious about how such a simple device could produce coffee that allegedly tastes so good.

Well, believe it or not it has less to do with the Chemex

itself and more to do with the the filters that are meant to be used with it. More on this in a bit…

Aside from the coffee, the first major appeal is the design.

For one, the entire coffee maker with the exception of the collar is made from sturdy borosilicate glass. This makes the brew process completely transparent.

is also on display at the MOMA in New York, so that’s certainly an endorsement for its aesthetic appeal.

Another major selling point is that the Chemex

is one of the few coffee makers out there that is manufactured here in the USA. There are only a handful of coffee makers that can still claim the same.

Finally, as I mentioned earlier, there are the filters. They are thick paper that prevent sediment and other undesirable bitter compounds found in coffee from passing into the final cup. With Chemex filters

you get an extremely clean cup of coffee. 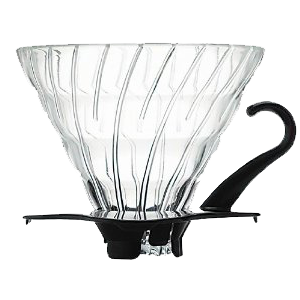 has many of the same draws that the Chemex has, particularly from a design and materials perspective.

It comes in a ceramic, glass, plastic or copper version (possibly more options). It also has a very small footprint and looks great.

Many people who only brew a single cup of coffee at a time are drawn to the Hario V60 because it is inexpensive, brews quickly, uses solid materials, and makes great coffee.

As far as the filters go, I think they are some of the best in the business. While they aren’t as thick as the Chemex filters, they are still thicker than many alternatives.

How These Coffeemaker Showdowns Work

If this is your first coffeemaker showdown, welcome! Basically, I take two coffee makers and declare a winner amongst the 9 rating categories I normally look at in my reviews. These are:

You can learn more about how I rate coffeemakers here.

It’s almost impossible to ensure that all variables are the same across both coffee makers. Additionally, I usually run very few trials across a very small sample size of people, so the results will never be perfect.

So here’s what I did in the first round of this showdown:

The V60 is the cheaper option between these two coffee makers, frequently hovering in the $10-$15 range. The Chemex is usually at least $35, but it depends on the size you buy.

Neither cup of coffee was great, as you may have seen in the video. I over-extracted both, which I think had more to do with the water temperature than anything else (I could be wrong).

In either case, the lesser of the two evils in terms of bitterness was the Hario V60.

Of course, taste isn’t the only thing that matters. Plus, this was only one trial/round of testing.

I have to give it to the Chemex here. Not a single issue with the design, and the glass is pretty solid.

Some would argue that one is more difficult to use than the other based on their different flow rates, but I think this is a little bit too nit-picky for the average user.

The Hario V60 is easier for the simple fact that it doesn’t have a carafe attached to it. Frankly, I’ve never had issues cleaning either of these coffee makers, but I’ve heard the Chemex does get a little cloudy after some time if you tend to use darker roasts.

The Hario V60 barely wins out here because the glass is a tad bit thicker. Plus, it’s a smaller coffee maker so it’s harder to accidentally bump it against say, your faucet.

The Hario V60 is faster with all else being the same, given the larger hole at the bottom. But brew speed in pour over is largely contingent on the user’s pour rate and the coffee’s grind.

The Chemex is in the MOMA. ‘Nuff said, man!

The Chemex will allow you to brew more cups of coffee, but aside from this there are no additional frills that either of these coffee makers can offer over the other.

While the Hario V60 beat out the Chemex by a score of 5-2, I still wouldn’t recommend it for everyone. There are certainly other things to factor into your decision, but I’ll try and make it easy for you.

Choose the Chemex if…

You want to be able to make more than just a couple cups of coffee at a time, support companies that manufacture their products in the U.S., and/or have the best-looking coffee maker possible, then the Chemex is definitely the way to go.

You can buy the Chemex 6 cup coffee maker on Amazon here:

Choose the Hario V60 if…

You’re looking to make just 1-2 cups of coffee at time but also want to improve your pour over technique to ultimately make the best coffee possible.

You can also buy a separate carafe for the Hario to make more than a few cups of coffee, but I’m personally not a fan of having too many separate parts.

You can buy the Hario V60 on Amazon here:

I’d love to hear what you think about this coffeemaker showdown, so if you have any comments or suggestions please leave them below. Same goes for questions, ask away!