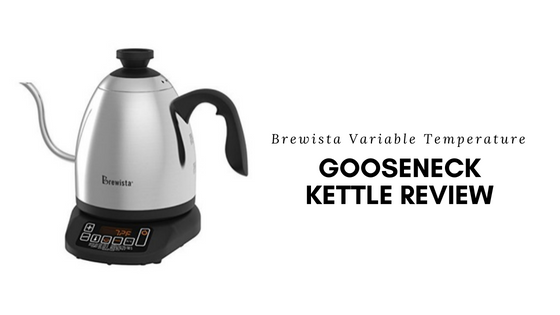 Please note: I received this product in exchange for an honest review. I received no compensation outside of the product itself. Please also note that some of the items below contain affiliate links. ﻿This﻿ means that if you buy one of the items, at no additional cost to you, I will earn a commission on each sale. I only promote products or services that I have investigated and truly feel deliver value to you, regardless of the compensation I may receive. Please do not spend any money on these products unless you feel you need them or they will help you make better coffee at home.

Back when I first started doing pour-over coffee at home, the Bonavita Variable Temperature Gooseneck Kettle was new to the scene, and quite revolutionary when compared to the competition.

And for a good 5-6 years it was my go-to kettle for coffee and tea.

Unfortunately, it started acting up at around year 6, where the kettle would merely boil the water, regardless of the temperature I had set.

The good news was that the folks from Brewista (former Bonavita kettle creators) reached out to me asking if I'd review their variable temperature gooseneck kettle. The timing couldn't have been better, assuming the Brewista would hold up as well as my Bonavita had for the previous 6 years.

Given the fact that durability matters for these relatively expensive kettles, I made sure I got some good use out of it before putting this review together.

You're probably trying to decide between a bunch of different kettles for your home coffee brewing needs, but if you're looking at the Brewista, you're very likely also looking at Bonavita's Variable Temperature Gooseneck Kettle (BVTGK).

Well, you should know that the Brewista kettle was designed to be a new and improved version of the BVTGK, and it was also created by the same guy who brought us the BVTGK.

So that alone should tell you that these kettles are gonna be pretty similar.

While the BVTGK has a 1 liter capacity, the Brewista can hold 1.2 liters of water.

As such, it has a bigger footprint on your counter, but not by much.

The most noticeable difference in its size comes when you actually use the kettle. It definitely has more weight, but this is offset by what feels like a much more ergonomic handle.

The “gooseneck” element of the kettle is perhaps the biggest reason a home barista would be drawn to a kettle like this.

From what I can tell, the respective goosenecks are pretty similar between the two kettles, with the Brewista maybe having a slight advantage in terms of pour control.

Really though, the difference is negligible. Both kettles have gooseneck spouts, and that should be good enough for pour-over purposes.

The last “major” difference between these two kettles comes down to the interface and added features of the Brewista kettle.

I found that the Brewista's LED display is harder to read with its orange numbers. Aside from this, most of the interface is the same with a few additional features.

For one, you can program the kettle to heat your water at any time you choose. This comes in handy if you can't be bothered to press the “on” button when you roll out of bed in the morning.

The second added feature is a beeping notification noise once the water has reached temperature.

This is a less useful feature than the programmable timer, but it's still useful for those times when your spouse asks you if you want tea, and proceeds to deliver it 2 hours later (because she forgets she was even boiling water)

If I had to pick one thing that I liked most about the Brewista kettle, it would have to be its large 1.2L capacity.

Believe it or not, there have been plenty of instances where I ran out of water mid-pour using my old BVTGK, and this is almost as frustrating as spilling coffee all over a white shirt (OK, so I'm exaggerating a little).

My second favorite thing about this kettle is the gooseneck itself.

It has a nice, controlled flow for a well-executed pour over coffee. And sure, you can get a kettle with a spout like this for a fraction of the cost, but it won't come with any of the extra bells and whistles like the programmable timer.

Maybe I have a defective unit, but there have been several instances where I was using the built-in timer when all of sudden, it would abruptly stop counting.

Sure, it doesn't really have much of an impact on my brew when it shuts off, but I still like to have this information at my disposal when making a pour over. For French Press, this is even more annoying given the fact that I am timing the total immersion time.

To me, it's kind of like putting some cookies in the oven only to realize 5-10 minutes later, that I forgot to turn on the timer.

I also really wish the kettle's base had some kind of built-in memory so that the user didn't have to reset their clock every time the kettle is unplugged then plugged back in to the wall outlet.

I know that this is pretty typical behavior for most appliances, but it would make the timer feature a lot more useful.

Finally, I wish the kettle would hold the temperature when returned to the base, without having to press the “hold” button. This extra step was kind of a nuisance with the Bonavita, so I had hoped it would be resolved with the Brewista.

So is the Brewista Variable Temperature Gooseneck Kettle the pour over kettle for you?

There is certainly no shortage of variable temperature gooseneck kettles on the market since the Bonavita took the industry by storm years ago. Still, the Brewista sets itself apart from the competition in a few key areas.

In terms of capacity, the 1.2 liters makes this kettle one of the largest in its class. 1.2 liters is not an excessive amount of water either, especially if you're brewing multiple cups of coffee at a time.

The Brewista is also one of the few kettles at the time of this review that offers programmability. This means that you can wake up to hot water that is ready-to-go, which can significantly reduce the amount of time it takes to make your coffee in the morning.

If large capacity and programmability matter to you, then I'd definitely recommend the Brewista.

If you're looking for something with a smaller footprint and/or aesthetic appeal, then there are probably better options out there. The Stagg EKG is probably the kettle to consider if this is a priority to you, though the original Bonavita will also do the trick for a fraction of the cost.