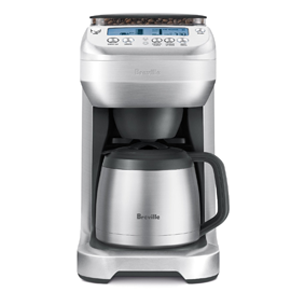 By now you are probably all-too-familiar with the chanting coffee snobs and their claims that pre-ground coffee is bush-league.

And I hate to say it, but the painful truth is that these coffee snobs are right.

I mean, it makes sense though, right? There are few things out there that are better tasting when they aren’t fresh, and the same principle holds true for coffee.

And that takes us to our present state. You want to start grinding your coffee fresh, but you don’t want to buy a separate grinder or experience the hassle that comes along with it. You want a coffee maker that can make a fresh cup of Joe all in one fell swoop.

The Breville BDC600 YouBrew is very likely your best bet. So let’s take a closer look, shall we?

Please note: Although I am reviewing this top rated coffee maker, I have no experience using it. Instead, I’ve summarized all of the most helpful reviews on this coffee maker from around the web that I could find. I do my best to make these types of reviews completely unbiased, making sure to cover both the positives and negatives. Since this is one of my older reviews, this is no longer a format I follow. You can learn more about how I review coffee makers here.

Based on the above, there is clearly a lot to discuss. Let’s get into the finer details.

Convenience is where the YouBrew wins

This is quite possibly the most versatile coffee maker I’ve reviewed to date. You can brew from 1 to 12 cups. You can schedule your brew with the built-in timer. You can adjust the brew strength. The water level is displayed on the LCD. There is a descaling notification. I could go on and on. The bottom line is that the YouBrew is meant to brew coffee conveniently, without compromising taste.

There was absolutely zero consensus when it came to rating the way the YouBrew’s coffee tastes. Many felt the coffee was too weak, while a seemingly equal number of people felt it was too strong. I didn’t know what to take away from the reviews on the coffee’s taste in the end, but my guess is that the inconsistencies are indicative of either a poorly manufactured coffee maker, or improper use.

An overwhelming number of reviewers pointed out that the coffee was not hot enough, which leads me to believe that this is the case for most, if not all of the YouBrew’s out there. Many reviewers went to the lengths of measuring the temperatures of the coffee they brewed. 155˚F was the result of these tests. As the Specialty Coffee Association of America (SCAA) says: brew temperature should fall in the 195-205˚F range. Seeing that many fresh cups were measuring in at 155˚ is disconcerting to say the least. The brew temperature is likely attributed to the fact that the YouBrew uses an aluminum heating element, not a copper one like the Technivorm Moccamaster.

You should definitely check out the following video by the awesome folks at Seattle Coffee Gear. They conduct a blind taste test between a Technivorm (known for making coffee in the right temperature range) and the YouBrew.

P.S. if the video below helps your buying decision, please consider buying this coffee maker from Seattle Coffee Gear.

There were a lot of complaints about the built-in grinder’s noise amongst reviewers. I figured that many of them are probably not accustomed to using coffee grinders, and therefore don’t know just how loud they can be. But then I watched the video below and realized these reviewers were right. This is a pretty loud grinder.

It is worth mentioning that there are both plusses and minuses when it comes to the YouBrew’s carafe. Positives are that the carafe is insulated and doesn’t spill when pouring. Negatives are that this insulation isn’t the best you will find, and you need to make sure you pre-heat the carafe with hot water if you want your coffee to stay hot for a longer period. Secondly, in order to pour out the last few drops, you practically have to tilt the carafe upside down. Even then, users have found it very frustrating to get all of the coffee out of the carafe. I’m sure you’ve experienced carafes like these before, it’s no fun.

Bean to water ratio? Grind settings? Where are they?

If you are considering the YouBrew there are a couple more things to take into consideration that others have cited frequently. One is the coarseness (or fineness depending on who you’re talking to) of the coffee once it’s ground. Some say it’s too coarse, others say too fine. I’m guessing it’s more on the coarse side because Breville themselves say that finer ground coffee can result in overflow.

Whether it’s too coarse or too fine, the main issue is that there is only one grind setting. You can’t adjust how finely your coffee is ground, and many of people found the coffee too strong or too weak as a result of this. While you can adjust the time the ground coffee and water steep, this was still a disappointment to many who couldn’t get their coffee to taste the way they wanted it.

Also worth mentioning is the fact that many reviewers found that the YouBrew grinds more beans than necessary. As a result, their coffee supply was being depleted much more quickly than they had experienced with similar machines.

The bottom line in this case is that you can’t adjust the amount of beans that are used in relation to the amount of water they are being brewed with. But conducting those kinds of calculations may defeat the main purpose of this machine: convenience.

Now that we’ve talked extensively about the YouBrew’s features, let’s break down the ratings one category at a time.

At just under $300, this isn’t a cheap coffee maker by any stretch. It is however, incredibly versatile, which could certainly justify the higher price tag. Still, I don’t think this saves the YouBrew from a low score in the Price category.

This was the most contentious category amongst reviewers. Some said the coffee produced is too weak. Others, too strong. And even more people said it was just right. In the blind taste test from the video above, the YouBrew beats out the Technivorm, which is known for its advanced water heating mechanisms. But since the reviews were so split here, I’ll have to split the score.

Sure, it’s a big machine, but it is still designed very well. The LCD screen is brilliant both literally and figuratively, and the machine has a solid stainless steel casing. Also, the water and coffee only come in contact with BPA free plastics. I think you get what you pay for here when it comes to the YouBrew’s quality.

While the number of options may seem daunting to many, few reviewers, if any, found this coffee maker difficult to use. The only caveat is that if the “computer” malfunctions on this machine, there is no simple back up option to simply brew coffee without all of the bells and whistles. You shouldn’t have to worry about this too much though, as there were few reported reliability issues.

No problems in this department. In fact, there are a number of indicators that notify you when cleaning is needed. This is a very cool feature if you ask me. Do keep in mind that there will be more parts to clean because it is a grind and brew coffee maker.

There were definitely reports of YouBrews breaking down over short periods of time. Although these were a minority of cases, it is still something to keep in mind if you are looking for a coffee maker that will last you a long time.

Good news is that the YouBrew comes with a 1 year warranty, and defective units are readily exchanged by Breville.

The only thing that really detracts from the way the YouBrew looks is its size. It’s big! Otherwise, the stainless steel with LCD screen looks quite elegant in pretty much any kitchen.

The single serve is within SCAA’s recommendations of 2-8 minutes, but at 7 minutes for a single cup you are probably better off doing a pour-over. For 8 cups, it will take about 6-8 minutes, and a full pot (12 cups) takes about 10-11 minutes.

This is probably the most versatile machine we’ve reviewed up to this point, as mentioned earlier. In fact, I don’t even think I can list everything this coffee maker does without leaving something out. Check out one of the videos above to get the complete run-down.

You would be hard-pressed to find a better grind and brew coffee maker that is currently on the market. This particular model has already separated itself from the competition with its endless list of features and tasty coffee (to many).

The YouBrew also keeps steam out of the bean chamber during the brew cycle, keeping your beans protected from moisture. Practically none of the other grind and brew coffee makers out there can claim the same.

If you are all about convenience and fresher coffee, the YouBrew may be a great choice.

Have experience with this coffee maker? Please share in the comments below…good or bad!