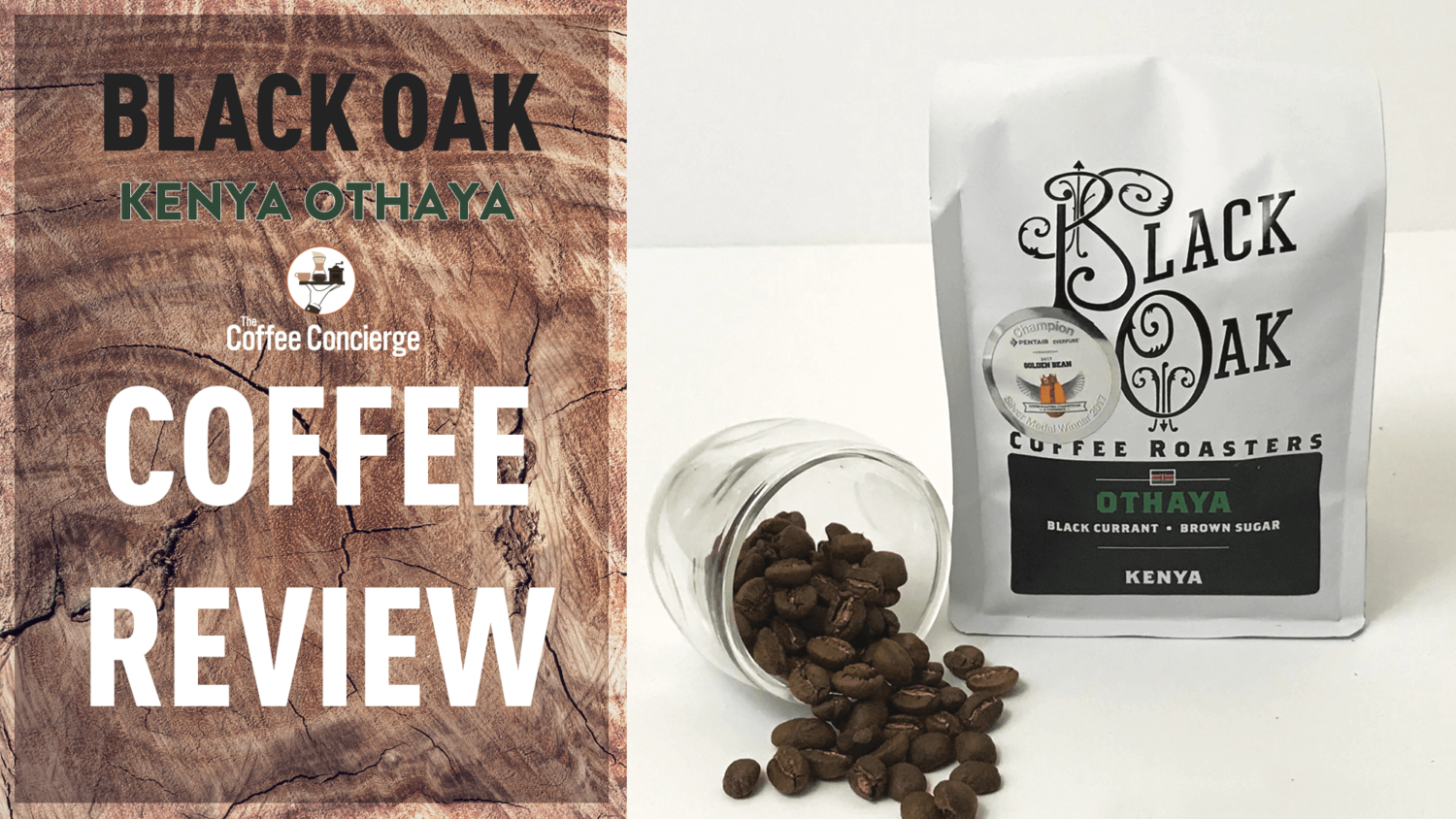 Disclosure: I received a 12oz bag of the coffee for free in exchange for a review. I do my best to not let free coffee submissions influence my ratings, but of course, it is impossible to eliminate all potential biases.

You can learn more about how I review coffee here.

Kenya is my favorite coffee origin for one simple reason: the coffee generally tastes amazing.

Couple that up with a good roaster like Black Oak Coffee (Ukiah, CA), and you've got yourself a recipe for coffee nirvana.

This is the Othaya, named after the coffee's producer, the Othaya Farmers Co-op in Central Kenya. The Othaya was a winner in multiple categories at the Golden Bean 2017 coffee competition:

Learn more about the Golden Bean Awards and see all of the other winners here. We had some friends over for Halloween and decided to cup the Othaya, along with 4 other coffees I had recently received, 3 of which also came from Black Oak.

Although I initially knew which coffee was which, as we proceeded to the cupping I couldn't remember the order. So, for the most part, this was a blind cupping because I neither knew which coffee had won awards, nor what the various tasting notes were on the bags.

Some of the other taste descriptions our amateur cuppers came up with:

Don't read too much into some of these descriptions though. It was a pretty disorganized cupping and we basically took turns sampling each coffee one at a time. As a result, we didn't get around to the Othaya until it had cooled quite a bit.

Personally, I thought the Othaya had all of the elements of a typical high-quality Kenyan coffee, with a strong raspberry and tomato soup aroma and taste.

The Othaya was a Silver Medal winner for the espresso category in 2017's Golden Bean awards, and I was not the least bit surprised once I finally got around to pulling a shot.

The milk chocolate aroma was met with a raisin flavor upon the first sip. It also had a nice syrupy body that reminded me of pomegranate juice.

Interestingly, as the espresso cooled, the flavors got even juicier. As drip coffee, there were a lot of consistencies across brew methods in both the aroma and the flavor of the Othaya.

I picked up some cherry and cinnamon when I brewed it in the Chemex.

When I brewed it in the French Press, there was more earthiness to the flavor, with that same familiar (at least to my nose) tomato soup aroma.

In the end, the Othaya did not discriminate against any brew method, making it a very versatile coffee.

African light roast coffees like the Othaya from Black Oak Coffee Roasters are generally gonna be quite bright, and as such, are an acquired taste for those who mostly drink dark roast coffee.

With this intense acidity, the sweetness can sometimes be lost during a tasting. As such, I thought this was one of the Othaya's biggest weaknesses, though I'm sure Black Oak would disagree with me.

Still, I think Kenyan coffees are some of the best to get your feet wet with, because a lot of these coffees have syrupy bodies that any coffee lover can appreciate. The Othaya is no exception.

In the end, Black Oak Coffee Roasters' Kenya Othaya gets my stamp of approval for all brew methods, especially if you enjoy light roast coffee. Like the Chelelektu, it's tough to mess up, even under not-so-perfect conditions.

As always though, make sure you have a good burr coffee grinder on hand and good quality water to brew with. Without these things, it can be difficult to get the most out of Specialty Coffee like this.

You can buy this coffee from Black Oak Coffee while it's still available by clicking the button below:

Tried This Coffee? Have Questions?

If you've tried this coffee, let us know what you thought by leaving a review in the comments section below.

If you have questions, I'm also happy to try and answer them. Leave those below!