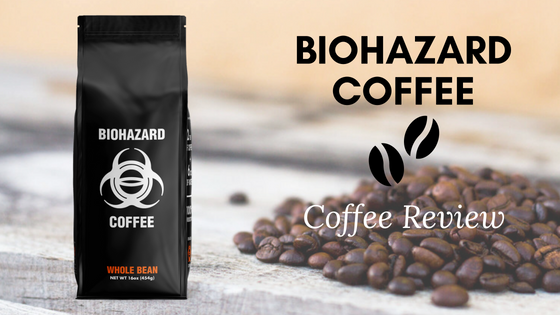 I not only received this bag of coffee for free in exchange for a review, but this was also a sponsored coffee review, meaning I was also paid $100 to have the review moved to the front of the editorial calendar.
Although a sponsored review is expedited, it does not mean that the coffee will automatically be reviewed favorably. Instead, if the coffee is reviewed negatively, the roaster is given the option to “abort” its impending publication.
You can learn more about my sponsored review policy here.
I welcome your feedback about this sponsored review format, so please share your feedback by either leaving a comment below or contacting me privately here.

In fact, if you’ve stumbled upon this review you may already be familiar with Death Wish Coffee, whose claim to fame is being the “World’s Strongest Coffee”.

Well, there is a relatively new World’s Strongest Coffee in town, and it goes by the equally unsettling name of Biohazard Coffee.

How Much Caffeine is in Biohazard Coffee?

Compared to your typical cup of coffee, Biohazard contains 4 to 5 times the caffeine, according to Caffeine Informer.

Biohazard Coffee comes in at 928mg of caffeine per 12oz cup of coffee, or 77.3mg per ounce of coffee.

By comparison, Death Wish Coffee has 944mg of caffeine for a 16oz cup, or 59mg per ounce of coffee.

Still, when you get to caffeine levels this high, a few extra mg isn’t going to make any noticeable difference. It’s already an insane amount of caffeine.

Biohazard Coffee also had their coffee lab-tested in 2017 to claim their self-proclaimed title of “World’s Strongest Coffee.” There is no information on the website about what other coffees they were tested against, but I imagine Death Wish was one of them.

How Does Biohazard Coffee Taste?

Though Robusta beans have a bad wrap in the world of coffee, I found that Biohazard tasted pretty good.

Granted, it is also a pre-ground dark roast coffee, which is pretty much the opposite of the stuff I drink on a regular basis. But despite this, I didn’t feel the need to add any milk or sugar to mask bad flavors.

It definitely tasted similar to Death Wish, with those prominent popcorn flavor notes.

But if my memory serves me correctly, Death Wish had a more intense body and some additional bitterness. By contrast, Biohazard tasted “cleaner”, less bitter, and less gritty.

Still, it’s not a coffee I would seek out specifically for great taste.

If you’re looking for a coffee with the highest possible caffeine content without compromising too much flavor, then I’d recommend Biohazard Coffee.

The flavor is consistent, albeit not very complex. I do think the coffee has changed my view of Robusta beans to some extent. At times, I was surprised that there was no arabica present in the blend.

I also liked the flavor more than Death Wish.

Granted, I bought Death Wish in its whole bean form, while I received Biohazard in its pre-ground form, so it wasn’t the fairest comparison. But I could tell that Biohazard had significantly less oil and sediment, whether or not that had anything to do with its pre-ground state is beyond me.