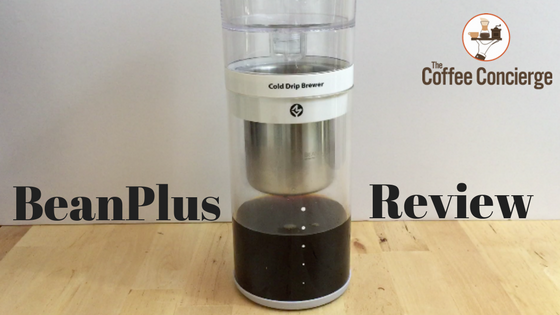 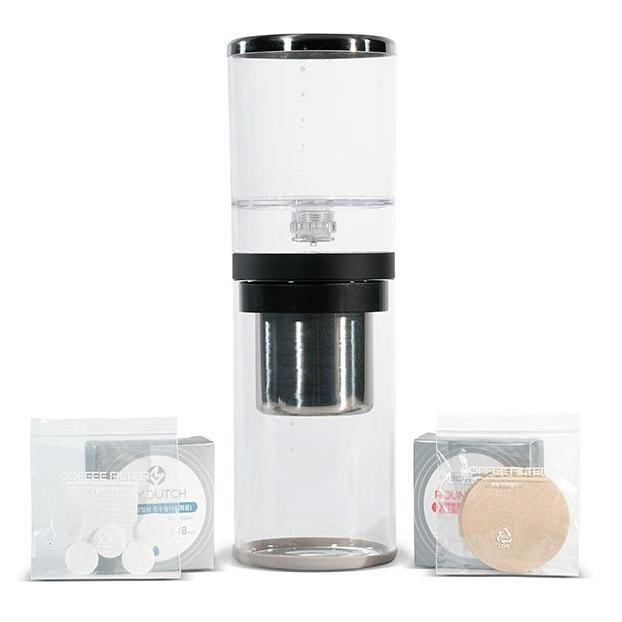 Cold brew coffee has not slowed down in terms of popularity. Even in the cold Winter months here to the north of the equator, cold brew coffee remains a popular option amongst coffee addicts.

And although much of cold brew’s growth is witnessed on café menus and in grocery store aisles, cold brew coffee makers have also become a popular option for those who want to make cold brew themselves.

While you don’t need a coffee maker or any special apparatus for making cold brew coffee, there are some methods, like slow drip, that can bring out different (and sometimes, better) flavors. Plus, some cold brew coffee makers are actually easier to use and clean than simply using a large pot and filter.

The BeanPlus is one of these few cold brew coffee makers that fall under this slow drip category, and it may be the best one I’ve used to-date.

Please note: I received this product in exchange for an honest review. I received no compensation outside of the product itself. Please also note that some of the items below contain affiliate links. This means that if you buy one of the items, at no additional cost to you, I will earn a commission on each sale. I only promote products or services that I have investigated and truly feel deliver value to you, regardless of the compensation I may receive. Please do not spend any money on these products unless you feel you need them or they will help you make better coffee at home. You can review my affiliate disclosure here.

What Makes The BeanPlus Different?

As I mentioned before, the BeanPlus makes cold brew coffee via the slow drip method.

For the uninitiated, slow drip cold brew is made by dripping cold or room-temperature water slowly over ground coffee. The water eventually fully saturates the ground coffee before passing through a filter and then into a carafe, where it has become the final cold brewed coffee concentrate.

The slow drip method is one of the original ways to make cold brew coffee, and was popularized in Japan as far back as the 1600s when Dutch traders introduced it to the Japanese.

From my understanding, the original slow drip coffee maker was known as the Kyoto, named after the city in which it was popularized. The Kyoto looks like a giant hourglass, and is really more suitable in a coffee shop than a home kitchen. The method itself takes at least 4-6 hours to brew, which is quicker than the more popular immersion cold brew method.

Aside from the fact that the BeanPlus makes slow drip cold brew, it is also far more compact than the traditional Kyotos you will typically see in Specialty Coffee shops. And although its size compares to the Cold Bruer, which I reviewed several years ago, there are some key distinctions that I think make it a better option.

Let’s go over those now.

The Bruer is beautiful, I’m not gonna lie. And this is one of the main reasons I bought it shortly after it was funded on Kickstarter years ago. With an all-glass body and blue silicone components, there was very little to criticize from an aesthetic perspective. 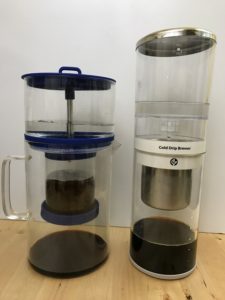 However, with the fantastic aesthetics through the materials used, there were some glaring performance and durability issues that ultimately detracted from the first version of the Bruer.

For one, the glass was very thin.

If you own a Chemex and think that its glass is thin, you’d be floored by how thin the Bruer 1.0’s glass is. Though I’ve yet to accidentally destroy it myself, I know that with frequent use it’s only a matter of time.

For the sake of argument though, let’s say I don’t end up accidentally shattering the Bruer 1.0 into little itty bitty pieces. Does it do its job even when fully intact?

Unfortunately, no. And this is because the silicone drip valve is not consistent with the rate in which it drips.

If you enjoy the element of surprise in your coffee, especially if it tastes like a bitter mess, then by all means, stick to the Bruer. However, if you want repeatably good results in your slow drip cold brew, you’ll have to look elsewhere.

And this is where the BeanPlus finally comes in.

For one, the upper chamber/water reservoir is made from solid plastic, while the lower chamber/carafe is made from glass. Granted, the glass is also pretty thin, but you only have one piece to worry about destroying, and it’s fortunately not the most important piece.

So hypothetically, if you were to break the glass carafe, you could swap it out with an alternative receptacle and get back to making delicious cold brew.

With the Bruer though, you would be more limited in the carafe sizes you could swap in. Plus, if you were to break the upper chamber/reservoir, it’s game over.

With the BeanPlus, it would be tough to break that upper chamber, considering it’s made of plastic.

The second main difference that makes the BeanPlus a winner over the Bruer (in my opinion) is the patented slow drip valve. That baby is flawlessly consistent throughout the brew cycle. It also connects with a small cloth water filter as an added bonus.

To learn more about how I rate and review coffee makers, click here.

She ain’t cheap, boys and girls, but BeanPlus does come in at a very competitive price when compared to other slow drip cold brew coffee makers like the Bruer. Plus (see what I did there?), the price is a dream when you compare it to the Kyoto.

Let’s remind ourselves that you can make cold brew coffee for much less money though, which is why I can’t give this the best score for the price.

In the somewhat limited experiments I’ve conducted, I’ve preferred the taste of slow drip cold brew over immersion cold brew. Because of this, it would be hard to say that the BeanPlus produces anything short of excellent cold brew coffee.

Given that you can accurately experiment with the drip rate in addition to the typical things like grind size and water temperature (cold vs. room-temp), I think you’d be hard pressed to produce better-tasting cold brew from alternative coffee makers.

I’d like to see a bigger version, but I think the design is nearly flawless.

My one complaint is that I think there are just a few too many pieces that I think detract from the intuitiveness. Still, since we’re only talking about materials used and the number of pieces, I can only detract a little bit here.

While I was actually able to figure out how to use the BeanPlus without reading the instructions, it did take me a little bit of time to piece the thing together. And considering I had ample experience with the similarly-designed Bruer, I had a slight advantage over someone who is completely new to slow drip coffee makers. 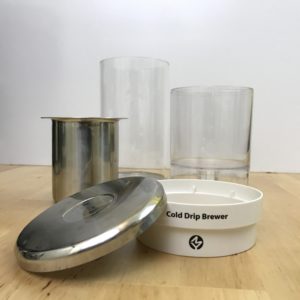 Is it easier to use than the Bruer? Yes, I think so.

One of the things that drives me crazy about the Bruer is adding the filter piece at the base of the water reservoir. It’s hard to get it to secure snugly, almost like adding a lid to a to-go cup.

Additionally, it’s difficult to dump the coffee into the grounds chamber without getting coffee in the water reservoir. By contrast, you can add ground coffee to the BeanPlus without worrying about mixing the coffee and water prematurely.

But before I turn this review into a coffeemaker showdown between the Bruer and the BeanPlus, let me just say that while the BeanPlus is easier to use, it’s still not entirely intuitive.

Since the coffee grounds are contained within the stainless steel chamber, it’s very easy to clean the BeanPlus. Additionally, the chamber is a completely separate piece from the reservoir and carafe, so there is really no chance of getting grounds mixed in with the rest of the coffee maker.

All parts are also dishwasher safe.

Manual coffee makers like the BeanPlus always do better in the durability department than their automatic counterparts. Additionally, the only fragile piece of the BeanPlus is the carafe itself, which is made of relatively thin glass.

The valve seems solid, and the coffee maker comes with replacement water filters. I’m confident it will last a very long time.

I think the BeanPlus looks pretty good, all things considered. If anything, the few plastic components detract from the overall aesthetics, but really, not by much.

Ultimately you’ll be the best judge of this.

Relative to other cold brew coffee makers, especially those that use the immersion method, the BeanPlus is fast.

Typically, the immersion cold brew coffee method takes at least 8 hours for proper extraction. By contrast, the slow drip method can take anywhere from 4-6 hours, depending on the drip speed.

The only cold brew method that’s faster is Japanese Style Iced Coffee/flash brew, which could take as little as 5 minutes.

But since we’re speaking in absolutes, I can’t give anything more than an average score here.

Summary: Is the BeanPlus Cold Brew Coffee Maker for You?

Before buying the BeanPlus, you need to be absolutely certain that you prefer the slow drip cold brew method over the immersion method. If you don’t know the difference, then I’d say it’s probably too soon for you to buy the BeanPlus.

If, however, you are certain that you prefer slow drip cold brew coffee over alternate methods, then the BeanPlus has my full endorsement over the closest competition, namely the Bruer and Kyoto.

With a consistent and adjustable drip valve, a small footprint, and solid construction, I haven’t tried a better slow drip cold brew coffee maker than the BeanPlus.

There are still some scenarios where you’d probably go with another cold brew coffee maker though, so let me break it down for you.

Go with the Bruer if…

The Bruer is a better option than the BeanPlus if…

Go with the Kyoto if…

The Kyoto is ideal if you actually own a coffee shop or have a lot of space and drink a ton of cold brew.

Unfortunately, both the BeanPlus and the Bruer don’t make more than a few cups of cold brew concentrate at a time, so the Kyoto is best for large batches of slow drip cold brew.

I would love to hear what you think about the BeanPlus. Leave a review below if you have experience using it! Or, if you have any questions, feel free to leave them below.