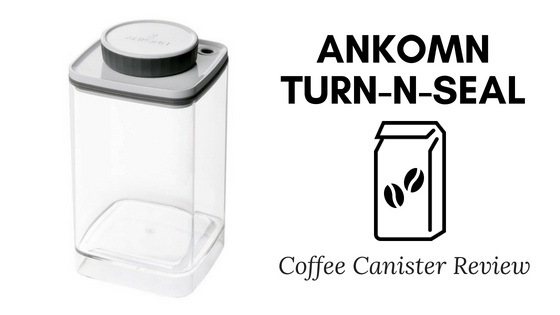 Please note: I received this product in exchange for an honest review. I received no compensation outside of the product itself. Please also note that some of the items below contain affiliate links. ﻿This﻿ means that if you buy one of the items, at no additional cost to you, I will earn a commission on each sale. I only promote products or services that I have investigated and truly feel deliver value to you, regardless of the compensation I may receive. Please do not spend any money on these products unless you feel you need them or they will help you make better coffee at home.

One of the things coffee snobs like me place emphasis on is the way we store our coffee beans.

More specifically, we obsessively attempt to preserve the coffee’s flavor and aroma for the longest possible period.

You see, just like most consumables, coffee doesn’t generally age well once it has been roasted.

Moisture, light, and air are said to be the primary agents that negatively affect coffee’s preservation. As such, coffee snobs are mostly in agreement when it comes to how they store their beans.

Today we’ll be taking a look at a product that protects against at least a few of these elements, it’s called the Ankomn Turn-N-Seal storage container.

The Ankomn Turn-N-Seal is a unique storage container for perishable food items like cereal, grains, and of course, coffee.

The container is made from Polycarbonate plastic, and passed its food safety tests. Though, any plastic product will be second-best when compared to its stainless steel and glass counterparts.

The Turn-N-Seal comes in 3 sizes: 0.3 quarts, 0.6 quarts, and 1.2 quarts. Ankomn sent us the 1.2 quart container, since it’s the most suitable size for a typical bag of coffee beans.

The most unique feature of the Turn-N-Seal is the method in which it removes air from the canister itself.

It is not merely an airtight seal that the Turn-N-Seal uses to protect its contents. Instead, there is a rotating knob on the lid that removes air from within the canister when turned clockwise.

It’s a similar concept to the Airscape in that its lid is designed to remove excess air from within the canister. In other words, it’s not just keeping air from entering, but it’s also removing the air that’s already inside the container.

Does the Turn-N-Seal keep your coffee fresher?

This is always the big question with products like these…and the truth is, I really couldn’t tell you.

I thought about doing a somewhat controlled experiment where I added half a bag of coffee beans to the Turn-N-Seal, while keeping the remaining beans in the bag they came in. I would then brew a batch of beans stored in the Turn-N-Seal at the same time as the beans from the bag, then compare how the two cups of coffee tasted.

I have yet to conduct this experiment though. So for now, you’ll have to take a leap of faith if this is your main reason for buying a product like this.

What I will point out is that the vacuum knob does seem to effectively remove a lot of the air within the container. It won’t remove all of it though.

In fact, when I asked Ankomn about this they told me that every consumer vacuum container on the market removes no more than 50% of the air from within the canister. In this case, the Turn-N-Seal removes just about that much air.

Anything more than 50% would require an air compressor.

How does it compare to similar products (like the Airscape)?

Again, I would have loved to do a side-by-side blind taste test comparing the Ankomn’s beans to the Airscape’s beans after a few weeks, but alas, it just didn’t happen (yet).

Still, there are plenty of differences between the two products that are probably enough to make an informed decision.

The Turn-N-Seal is plastic, while the Airscape is made from stainless steel or glass, depending on which version you choose.

I’m pretty sure 9/10 people would prefer to use the Airscape if they were making the decision exclusively based on what materials their coffee container was made from.

A key feature of both of these coffee containers is that vacuum feature that expels air from the container.

The Airscape uses an inner lid (there are two lids) with a one-way valve that removes air as it’s pushed down towards the bottom of the container. In contrast, the Turn-N-Seal removes air by turning a knob on top of the lid.

One advantage the Turn-N-Seal has here is the ease in which the lid can be removed.

Simply press the button on the lid to have the airtight seal released, then remove the lid.

With the Airscape, you have to slowly pull the inner lid out of the container, which definitely takes a bit of elbow grease.

Considering most specialty coffee comes in 12oz bags, capacity shouldn’t be an issue with either container. To be safe, I’d probably get a container that was no smaller than 0.6 quarts, since this would accommodate a pound of coffee.

Although prices fluctuate on site’s like Amazon, at the time of this review the Turn-N-Seal costs nearly twice as much as the Airscape.

To me, this is where the Turn-N-Seal really falls flat.

It’s hard for me to understand how a product that is smaller, transparent (remember, light is allegedly no bueno for coffee), AND made from plastic is twice the price of the Airscape.

Is the Turn-N-Seal for you?

Although the Turn-N-Seal is very easy to use and seems to get the job done when keeping your coffee fresh (again, I didn’t really test this scientifically), the price is a complete deal-breaker for me personally.

This is a very crowded space, and an innovative product has to really stand out and prove its superiority over the competition if anybody is going to even consider buying it.

In this case unfortunately, there are better alternatives that are half the price.

If you’re inclined to give the Turn-N-Seal a try, you can buy it on Amazon by clicking below: