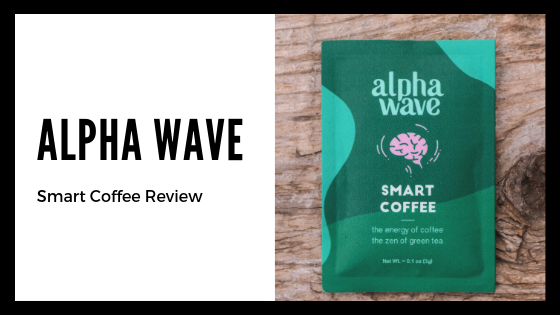 Please note: I received this product in exchange for an honest review. I received no compensation outside of the product itself. Please also note that some of the items below contain affiliate links. This means that if you buy one of the items, at no additional cost to you, I will earn a commission on each sale. I only promote products or services that I have investigated and truly feel deliver value to you, regardless of the compensation I may receive. Please do not spend any money on these products unless you feel you need them or they will help you make better coffee at home.

Alpha Wave Smart Coffee is the latest instant coffee concept on the scene, with a Kickstarter launching April 30th, 2019.

Smart Coffee is formulated to give you the caffeine kick you would normally get from coffee, without the unwanted side effects like the jitters or the 2 o’clock crash.

The way friends and founders, Sam and Karl, were able to achieve this in their new coffee drink is by adding L-theanine, a natural ingredient found in green tea directly to their coffee concoction.

And after giving it a pretty rigorous test myself, it seems to work. I wouldn’t give it any awards for great taste, but this isn’t really the problem Alpha Wave is trying to solve.

The small team behind Alpha Wave is currently trying to raise $6,000 to kick-off production with a US-based manufacturer. They’re asking for $19 for an 8-pack at the lowest pledge level, and that excludes shipping.

This is competitively priced when compared to Sudden Coffee, which I previously reviewed.

Of course, you’re not going to get the same kind of coffee quality necessarily, but again, Alpha Wave is not trying to compete in the Specialty Coffee space. They’re merely trying to solve a common problem amongst the more general coffee-drinking population.

I imagine they plan to eventually get the price per packet down, assuming a successful Kickstarter campaign for starters.

When it comes to taste, I was neither impressed nor disappointed.

Initially, I thought I tasted green tea as I was sipping on my first cup of Smart Coffee. But I imagine this was probably my mind just playing tricks on me with some kind of confirmation bias.

4/5 cups I brewed were with hot water, and the last cup was brewed with cold water so I could experience Smart Coffee in its iced form.

I also tried a cup mixed with oak milk, but I thought that gave it an unpleasant acidity that was not noticeable when drunk straight.

Ultimately, I preferred Smart Coffee black, with nothing added.

My wife wasn’t a fan of how it tasted, but I personally didn’t think it was bad. I just didn’t love it.

“Concept” is not usually a rating category I use, but considering Smart Coffee is really in its early stages, I didn’t think it made sense to evaluate it on things like “packaging” and “customer service”. So yeah, I chose “concept”, which is basically an evaluation of the mission behind this product.

I think it’s a great idea, which is what drew me in when Sam initially reached out to me asking if I’d try Smart Coffee out.

Personally, jitters and crash are not side effects that afflict me very often when drinking coffee, but I imagine that it does happen to others with lower caffeine tolerance.

As to how big that market is…I really have no idea. I guess we’ll have a better sense once there Kickstarter campaign is over.

“Efficacy” is also not one of my usual rating categories, but it felt appropriate here.

In other words: “does Smart Coffee deliver on its promise to reduce jitters and crashing?”

In my experience, yes. But again, I already have a high caffeine tolerance, so it’s hard to say if this was more the product or my unique biology.

To put Smart Coffee to the test on this, I had 3 cups within the span of about 3 hours. I realize I could have consumed the same amount in less time for an even more effective test, but I still think this was plenty of coffee for a relatively short period of time.

I’d be curious to hear about others’ experience when the time comes, but for now, it has my nod of approval in this important category.

Where can I buy Smart Coffee?

Smart Wave is currently only in pre-production through a Kickstarter campaign that ends in May 2019. Expected delivery for backers is predicted to be in August 2019 assuming all goes to plan.

If you believe in their mission, you can back them on their Kickstarter here (note: affiliate link)